TN NEET Exemption Bill return by Governor, NEET Exam to be base criteria for MBBS Admissions in the state 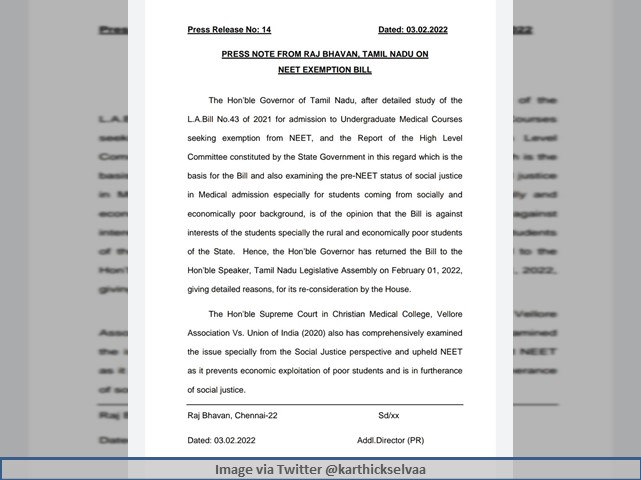 TN NEET Exemption Bill Returned: In a big blow to medical aspirants from Tamil Nadu, the TN Governor has returned the TN NEET Exemption Bill sent to him by the State Government. The ‘Anti NEET’ Bill was passed by the Tamil Nadu Government and State Assembly in September 2021 which sought exemption for medical aspirants from the state, from appearing for the National Eligibility cum Entrance Test, NEET – the national-level medical entrance exam. Now on 3rd February, the State Governor has returned the Bill back to the assembly, without giving his approval saying that it is “against the interest of the students.”

To confirm the development and share the reason for returning the bill back to the assembly, TN Governor said that the TN NEET Exemption Bill is “against the interest of the students.” The PR said “The bill is against the interests of the students especially in the rural and economically poor students of the state.” The official press release on the matter also added that banning NEET in Tamil Nadu as eligibility criteria for MBBS admission would not be fair to medical aspirants, especially since NEET is an exam approved by the Supreme Court as well.

The press release also informs that the bill has been returned after careful re-considerations and taking the social perspective of the NEET exam as well. “The Supreme court has also upheld NEET from a social justice perspective, as it prevents economic exploitation of poor students,” stated the release.