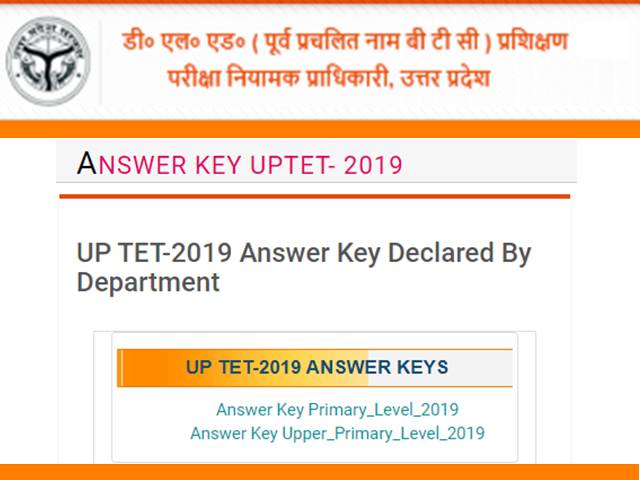 UPTET 2019 Answer Key Released: UPTET Answer Key 2019 has been formally released today for the recently concluded examination. U.P. Pariksha Niyamak Pradhikari has released the Primary and Upper Primary Level Answer Key for UPTET 2019. Candidates who have appeared for the Uttar Pradesh Teacher Eligibility Test 2019 examination can visit the official website to check the answer key. The answer key of UPTET 2019 has been released in the form of a PDF document which can be downloaded from the official website - updeled.gov.in. Candidates can also check the UPTET 2019 answer key for the Primary and Upper Primary Level through the direct link provided below.

UPTET 2019 Answer Key is released by the exam conducting authority to bring about transparency in the way examination is conducted. UPTET 2019 exam was held on 8th January 2020 at nearly 3049 centres spread across the state. As per tentative estimates, a total of 16.9 lakh candidates had appeared for the exam of which 15 lakh appeared for the exam. Now, all these candidates are eagerly awaiting the release of the UPTET 2019 Answer Key. UPTET Answer Key will help candidates who have appeared for the test to estimate the score that they might get in the examination. The UPTET answer key will contain the correct answers for different sets of papers that were used for the UPTET 2019 exam. Comparing the UPTET answer key against the answers submitted by them and check their score.

To make the process of accessing or getting the UPTET 2019 Answer Key easier, the exam authority will make it available online through the official exam portal. The UPTET 2019 Exam portal will host the answer key in the active services tab which will be accessible only through login process. The detailed step-wise process of downloading UPTET 2019 answer key is provided below: