Get Chapter wise revision notes on Chapter 5: Magnetism and Matter (Part III) for CBSE class 12 physics board exam 2017. These notes are useful for quick revision of important concepts before exams.

Get Chapter wise revision notes on Chapter 5: Magnetism and Matter (Part III) for CBSE class 12 physics board exam 2017. These notes are useful for quick revision of important concepts before exams.

Chapter wise revision notes for class 12 Physics on chapter 5 Magnetism and Matter (Part III) are available in this article. Important concepts of this chapter are already covered in Part I and Part II.

In this part, we will study the concepts given below:

In an atom, an electron revolves around the nucleus. The orbit of electron behaves like a current loop of current which has a definite magnetic dipole moment associated with it.

Magnetic dipole moment of an orbit of radius r having electron moving with velocity ω, is given by,

It is the ability of a material to permit magnetic lines of force to pass through it. It is given by,

μR ha no dimension and its value for vacuum is one.

Degree to which a magnetic field can magnetise a material is represented in terms of magnetic intensity.

It is given by, H = n i or H = B/ μ, where, n is number turns per unit length of a toroidal solenoid carrying a current i. It is a vector quantity and its SI unit is Am‒1.

Intensity of Magnetisation of a magnetic material is defined as magnetic moment per unit volume of the material.

Susceptibility of a magnetic material is defined as the ratio of the intensity of magnetisation (I) induced in the material to the magnetizing force (H) applied to it.

It is given by,

Different types of material behave differently in presence of external magnetic field and are categorised into following types:

Diamagnetic substances are those which have tendency to move from stronger to the weaker part of the external magnetic field. Materials in whose atoms (molecules) or ions do not possess any net magnetic moment of their own.

The individual atoms (or ions or molecules) of a paramagnetic material possess a permanent magnetic dipole moment of their own.

Ferromagnetic substances are those which gets strongly magnetised when placed in an external magnetic field. They have strong tendency to move from a region of weak magnetic field to strong magnetic field, i.e., they get strongly attracted to a magnet.

Where, C is a constant known as Curie’s constant.

Hysteresis curve is the relation between magnetic induction or intensity of magnetization of a ferromagnetic material with magnetizing force or magnetic intensity. 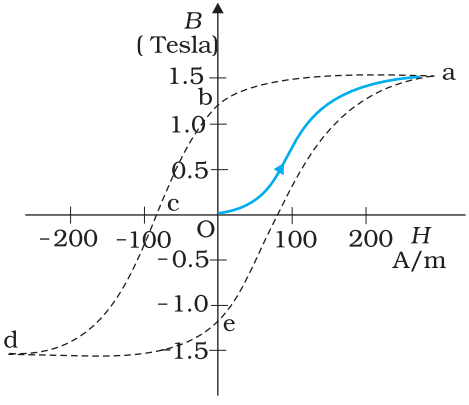 The graph given above shows hysteresis loop for ferromagnetic materials taken through one cycle of magnetisation.