Get CBSE Class 12th Physics Notes on Nuclei. These notes are important for coming CBSE class 12th board exam 2017.

Class 12th Physics Chapter Wise notes on Nuclei are available in this article. These notes are based on latest CBSE Class 12 Physics Syllabus 2017 and important for coming CBSE board exam 2017.

The topics covered in these notes are given below

The notes of the chapter are given below

The mass of an atom is extremely small. It means the mass of a carbon atom 12C is about 1.99 × 10‒26 kg. So, kilogram is not a convenient unit to measure such small mass. A different mass unit (atomic mass unit) is used for expressing atomic masses this is known as atomic mass unit.

In 1932 by James Chadwick observed emission of neutral radiation when beryllium nuclei were bombarded with alpha-particles (or helium nuclei).

Application of the principles of conservation of energy and momentum showed that if the neutral radiation consisted of photons, the energy of photons would have to be much higher than is available from the bombardment of beryllium nuclei with α-particles.

This phenomenon can be explained by assuming that the neutral radiation consists of a new type of neutral particles called neutrons.

• A free neutron, unlike a free proton, is unstable.

• It decays into a proton, an electron and a antineutrino (another elementary particle), and has a mean life of about 1000s. It is, however, stable inside the nucleus.

The composition of a nucleus can now be described using the following terms and symbols:

One also uses the term nucleon for a proton or a neutron.

Number of nucleons in an atom is its mass number A.

Nuclear species or nuclides are shown by the notation where X is the chemical symbol of the species.

For example, the nucleus of gold is denoted by  It contains 197 nucleons, of which 79 are protons and the rest 118 are neutrons.

Size of the Nucleus

Einstein showed from his theory of special relativity that it is necessary to treat mass as another form of energy.

Here the energy equivalent of mass m is related by the above equation and c is the velocity of light in vacuum and is approximately equal to 3×108 m s–1.

Size of the Nucleus

It has been found that a nucleus of mass number A has a radius then, R = Ro A1/3

The nuclei of isotopes of a given element contain the same number of protons, but differ from each other in their number of neutrons.

All nuclides with same mass number are called isobars.

The nucleus is made up of neutrons and protons so, it may be expected that the mass of the nucleus is equal to the total mass of its individual protons and neutrons. However, the nuclear mass is found to be always less than this.

For example, the nucleus of an oxygen atom (16O8) has 8 neutrons and 8 protons

It is the difference between the sum of the masses of protons and neutrons forming a nucleus and actual mass of the nucleus.

In other words, binding energy is the energy which should be supplied to the nucleus in order to break it up into its constituent particles.

It is the ratio of the binding energy of a nucleus to the number of the nucleons.

Binding Energy Curve and its Features 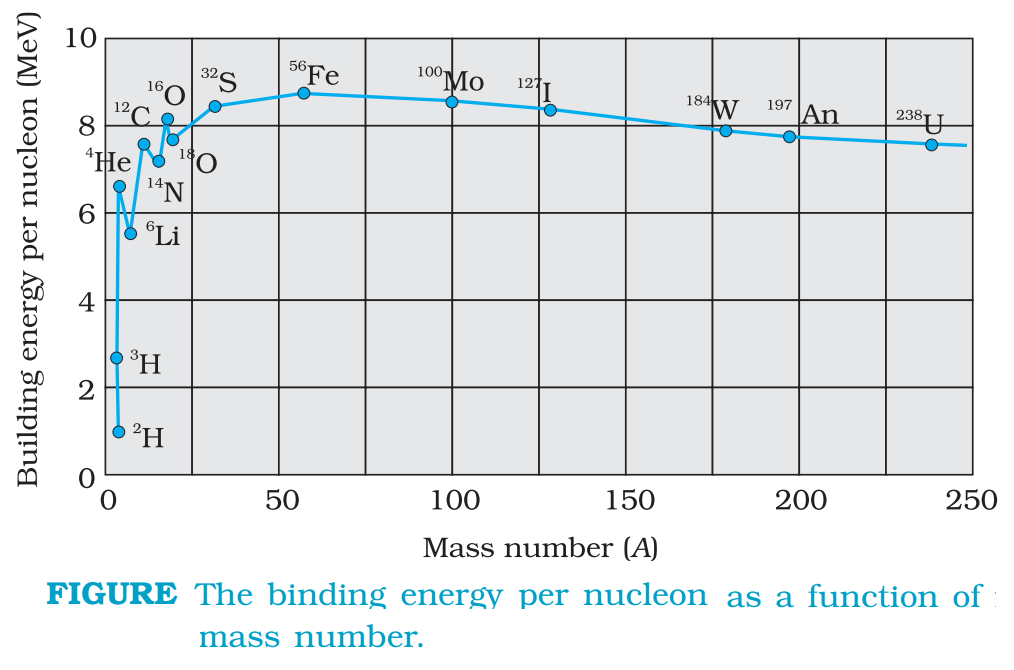 The main features of his curve are give below:

From above two observations we can draw the conclusions given below:

(a) The force is attractive and sufficiently strong to produce a binding energy of a few MeV per nucleon.

(b) The constancy of the binding energy in the range 30 < A < 170 is a consequence of the fact that the nuclear force is short-ranged.

(c)A very heavy nucleus, say A = 240, has lower binding energy per nucleon compared to that of a nucleus with A = 120. Thus if a nucleus A = 240 breaks into two A = 120 nuclei, nucleons get more tightly bound. This implies energy would be released in the process.

(d) Consider two very light nuclei (A ≤ 10) joining to form a heavier nucleus. The binding energy per nucleon of the fused heavier nuclei is more than the binding energy per nucleon of the lighter nuclei. This means that the final system is more tightly bound than the initial system. Again energy would be released in such a process of fusion. This is the energy source of the sun.

Therefore, to bind a nucleus together there must be a strong attractive force of a totally different kind.

This force is nuclear force (strongest force in nature). It is strong enough to overcome the repulsion between the (positively charged) protons and to bind both protons and neutrons into the tiny nuclear volume.

Some important features of the nuclear binding force are given below:

(ii) The nuclear force between two nucleons falls rapidly to zero as their distance is more than a few femtometres. This leads to saturation of forces in a medium or a large-sized nucleus, which is the reason for the constancy of the binding energy per nucleon. A rough plot of the potential energy between two nucleons as a function of distance is shown in the figure given below. The potential energy is a minimum at a distance r0 of about 0.8 fm. This means that the force is attractive for distances larger than 0.8 fm and repulsive if they are separated by distances less than 0.8 fm. 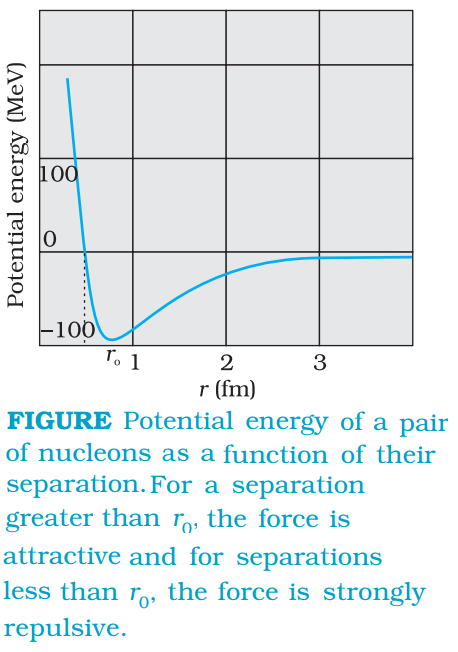