CBSE chapter wise notes based on chapter 12, Atoms of Class 12 Physics NCERT textbook are available in this article. These notes are important for CBSE class 12 Physics board exam 2017.

CBSE chapter wise notes of class 12 Physics based on chapter 12, Atoms of NCERT textbook are available in this article. These notes are based on latest CBSE syllabus 2017 and are very important for CBSE Class 12 Physics board exam 2017.

The topics covered in these key notes are given below

In 1898, J. J. Thomson in proposed first model of atom. According to this model, the +ve charge of the atom is uniformly distributed throughout the volume of the atom and the negatively charged electrons are embedded in it like seeds in a watermelon. This model is also known as plum pudding model of the atom. This model was able to explain the overall neutrality of an atom. However, its assumption that the total mass of an atom is uniformly distributed all over the atom was inconsistent with some of the experimental results.

After some years, Rutherford proposed a new model of atom based on Alpha-Particle Scattering experiment.

In 1911, Ernst Rutherford suggested some experiments to H. Geiger and E. Marsden.

Both scientists performed an experiment whose schematic diagram is shown in the figure given above.

They directed a beam of 5.5 MeV α-particles emitted from a 214Bi83 radioactive source at a thin metallic foil (made of gold).

Many of the α-particles pass through the foil which means that they do not suffer any collisions.

• Atom has a lot of empty space and the entire mass of the atom is confined to very small central core also known as nucleus. 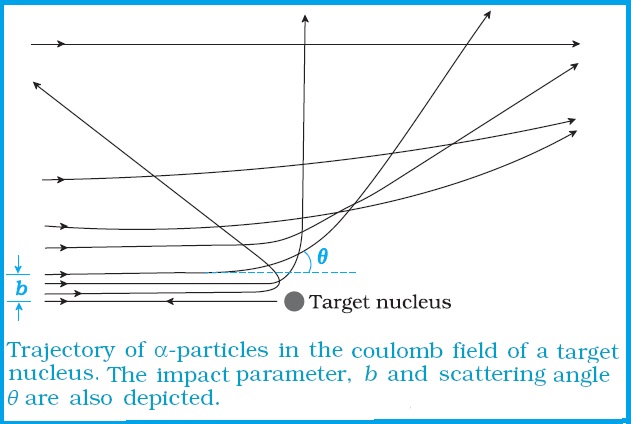 It is the perpendicular distance of the velocity vector of α particle from the central line of the nucleus, when the particle is far away from the nucleus of the atom.

It is the angle made by α particle when it gets deviated from its original path around the nucleus.

Postulates of Bohr Model of the Hydrogen Atom

(1) Bohr’s first postulate was that an electron in an atom could revolve in certain stable orbits without the emission of radiant energy, contrary to the predictions of electromagnetic theory. According to this postulate, each atom has certain definite stable states in which it can exist, and each possible state has definite total energy. These are called the stationary states of the atom.

(2) Bohr’s second postulate defines these stable orbits. This postulate states that the electron revolves around the nucleus only in those orbits for which the angular momentum is some integral multiple of h/2π where h is the Planck’s constant (= 6.6 × 10–34 J s). Thus the angular momentum (L) of the orbiting electron is quantised. That is, Ln = nh/2π

(3) Bohr’s third postulate incorporated into atomic theory the early quantum concepts that had been developed by Planck and Einstein. It states that an electron might make a transition from one of its specified non-radiating orbits to another of lower energy. When it does so, a photon is emitted having energy equal to the energy difference between the initial and final states. The frequency of the emitted photon is then given by, h v = Ei ‒ Ef

Where, Ei and Ef are the energies of the initial and final states and Ei > Ef.

The radius is given by,

The velocity is given by,

Total energy is given by,

The negative sign of the total energy of an electron moving in an orbit means that the electron is bound with the nucleus. Energy will thus be required to remove the electron from the hydrogen atom to a distance infinitely far away from its nucleus (or proton in hydrogen atom).

These energy levels of hydrogen atom are represented in energy level diagram given below. 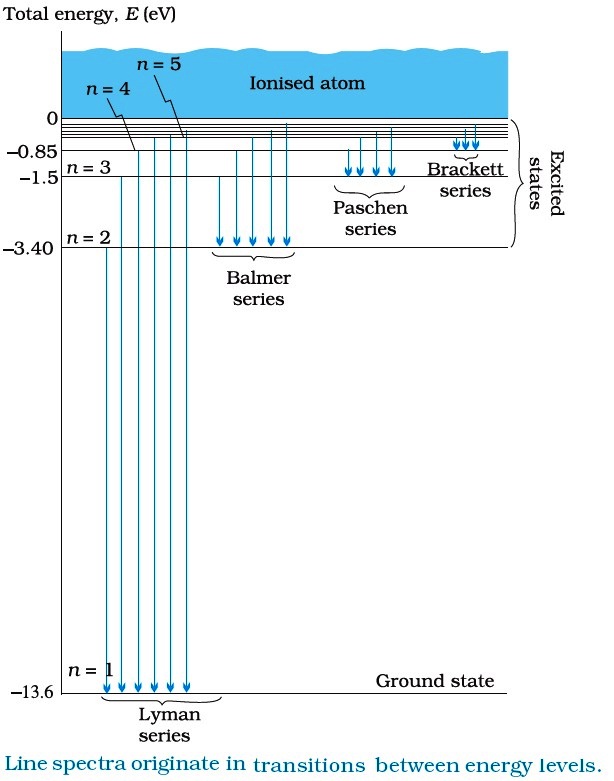 Atoms of each element are stable and emit characteristic spectrum. The spectrum consists of a set of isolated parallel lines termed as line spectrum. It provides useful information about the atomic structure. 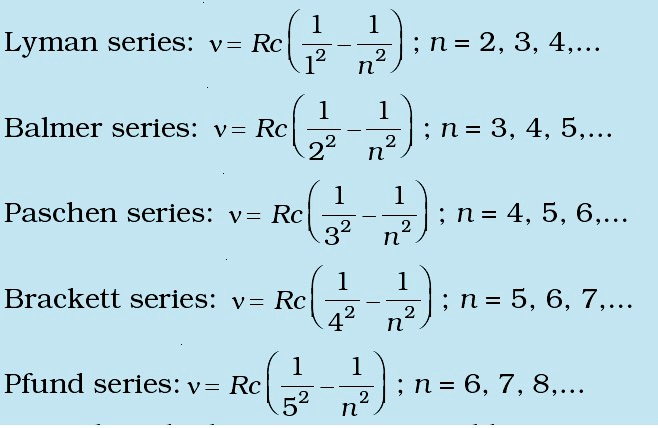