Important revision notes on Chapter-4: Moving Charges and Magnetism of NCERT class 11 Physics textbook are available in this article.

The topics covered in this part are given below:

• Magnetic force on a current-carrying conductor

• Motion of a charged particle in a Magnetic Field

• Motion of a charge in Combined Electric and Magnetic Fields

During a lecture demonstration in 1820, the Danish physicist Hans Christian Oersted noticed that a current in a straight wire caused a noticeable deflection in a nearby magnetic compass needle. He further investigated this phenomenon and confirmed the phenomenon of magnetic field around current carrying conductor.

It is the space around a magnet or current carrying conductor around which magnetic effects can be experienced. It is a vector quantity and its SI unit is tesla (T) or Wbm‒2.

A charge can produce magnetic field if it is in motion. Magnetic field can also interact with a moving charge.

Assume a point charge q (moving with a velocity v and, located at r at a given time t) in presence of both the electric field E (r) and the magnetic field B (r). The force on an electric charge q due to both of them is given by,

Careful analysis of this expression shows that:

•     Lorentz Force depends on q, v and B (charge of the particle, the velocity and the magnetic field). Force on a negative charge is opposite to that on a positive charge.

Magnetic force on a current-carrying conductor

The direction of F is perpendicular to both l and B and can be obtained with the help of Fleming’s Left hand rule.

Motion of a charged particle in Magnetic Field

A force on a particle does work if the force has a component along (or opposed to) the direction of motion of the particle.

In the case of motion of a charge in a magnetic field, the magnetic force is perpendicular to the velocity of the particle. So no work is done and no change in the magnitude of the velocity is produced (though the direction of momentum may be changed).

Case 1st: When v is perpendicular to B 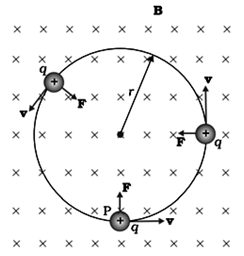 In this case, radius described by charge particle is given by, r = m v / q B

Case 2nd: When v is making an angle with B other than 0o 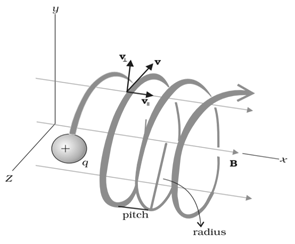 The distance moved along the magnetic field in one rotation is called pitch p and,

Motion of a charge in Combined Electric and Magnetic Fields 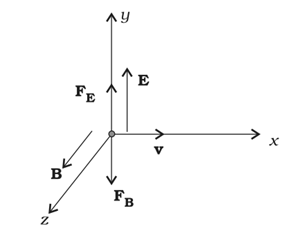 Consider the situation shown in figure given above, in this particular case we have:

Here, electric and magnetic forces are in opposite directions as shown in the figure.

If we adjust the value of E and B such that magnitude of the two forces are equal. Then, total force on the charge is zero and the charge will move in the fields undeflected.

This condition can be used to select charged particles of a particular velocity out of a beam containing charges moving with different speeds (irrespective of their charge and mass). The crossed E and B fields, therefore, serve as a velocity selector.

Only particles with speed E/B pass undeflected through the region of crossed fields.

It is a machine to accelerate charged particles or ions to high energies.

The cyclotron uses both electric and magnetic fields in combination to increase the energy of charged particles. As the fields are perpendicular to each other they are called crossed fields. 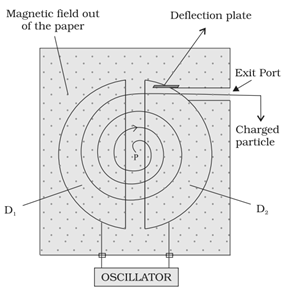 A schematic sketch of the cyclotron is shown in the figure given above. There is a source of charged particles or ions at P which move in a circular fashion in the dees, D1 and D2, on account of a uniform perpendicular magnetic field B. An alternating voltage source accelerates these ions to high speeds. The ions are eventually ‘extracted’ at the exit port.

In case of cyclotron,