This article provides you the revision notes on Class 12 Chemistry: Chapter- Polymers, to give you a quick glance of the chapter. These quick notes are prepared strictly according to the latest CBSE syllabus for Class 12th Chemistry.

This article provides you the revision notes on Class 12 Chemistry: Chapter- Polymers, to give you a quick glance of the chapter. In this particular part you will learn about polymers, their classification, methods of polymerization and preparation of some important polymers. These quick notes are prepared strictly according to the latest CBSE syllabus for Class 12th Chemistry.

• Preparation of some important addition polymers

Polymers are defined as high molecular mass macromolecules which consist of repeating structural units derived from the appropriate monomers.

The unit molecules that combine with each other to to form a polymer is called a monomer.

The process of formation of polymers from respective monomers is called polymerisation.

On the basis of source of availability, polymers can be divided into the following types:

o Natural polymers: These are the polymers that exist in nature,i.e., are found in plants and animals.

o Semi-synthetic polymers: These are polymers that are prepared by making some modification in natural polymers by artificial means, in laboratory.

o Synthetic polymers: These are the man-made polymers,i.e., the polymers that are prepared in laboratory.

On the basis of structure, polymers can be categorized into the following types:

o Linear polymers: These are the polymers in which the monomer units are linked to one another to form long and straight chains.
These chains are closely packed in space which causes the linear polymers to have high densities, tensile strength and high melting and boiling points.

Branching causes these polymers to be loosely packed in space due to which thay have low densities, low tensile strength as well as low melting and boiling points. For example: Low density polyethene (LDPE), amylopectin, glycogen.

o Cross-linked or network polymers:  These are the polymers formed of various linear polymers connected to each other by strong covalent bonds.

These are polymers hard, rigid and brittle.

On the basis of mode of polymerization, polymers are of following two types:

o  Addition polymers: These are the polymers formed by the repeated addition of monomer molecules containing multiple bonds.

(i) Homopolymers: These are the polymers derived from the polymerisation of only one kind of monomers.

(ii) Copolymers: These are the polymers obtained by the polymerisation of two or more kind of monomers.
For example:

•   Condensation polymers: These polymers are formed by the repeated condensation reaction of different bifunctional or trifunctional monomers, with the elimination of small molecules like H2O,HCl, CH3OH.

On the basis of the molecular forces, the polymers can be classified as:

o Elastomers: These polymers are held together by weak van der Waals, forces and have low elasticity. For example: Buna-S, buna-N, neoprene.

o Fibres: These are the polymer held together by strong hydrogen bonds. They have high tensile strength and sharp melting point. For example: Nylon, polyster, silk, wool, orlon, rayon.

o Thermoplastics polymers: They are the polymers having intermolecular forces of attraction intermediate between elastomers and fibers. They can be made soft and remoulded by heating. For example: Polythene, PVC, polystrene, polypropene.

o Thermosetting polymers: These are the hard, rigid, cross-linked polymers. They cannot be remoulded once set into a desired shape.  For example: Melamine, bakelite.

There are two general methods of polymerisation:

Molecules of the same monomer or different monomers simply add together to form a polymer.

The monomers used are mainly the unsaturated compounds.

• Free radical polymerization: It involves formation of reactive intermediate such as free radical, a carbocation or a carbanion.

This is a three step process:

For example, the ethene is converted to polythene by free radical polymerization as follows:

Preparation of some important addition polymers

The polythene is of two types:

It is chemically inert and tough but flexible and a poor conductor of electricity.

It is used in the insulation of electricity carrying wires and manufacture of squeeze bottles, toys and flexible pipes.

(ii) High density polyethene (HDPE): It is obtained by the addition polymerisation of ethene at 330 to 350 K at atmospheric pressure.

It is tough and hard with high tensile strength.

It is used in the manufacture of plastic containers, house wares, pipes.

• It is obtained by the addition polymerisation of acrylonitrile in presence of a peroxide catalyst.

• It is used in the formation of substitute for wool as orlon or acrilan.

• It is obtained by the free radical polymerisation of tetrafluoroethene at high pressures.

• It is chemically inert and resistant to attack by corrosive reagents.

• It is used in the manufacture of oil seals and gasket and non-stick kitchen wares.

It occurs in a stepwise manner with elimination of some smaller molecules like H2O, NH3, HCI, ROH, etc., therefore it is also named as step Growth Polymerisation.

For example: Dacron is obtained by the condensation polymerization of ethylene glycol and terephthalic acid.

Some important condensation polymerisation reactions are:

These are the polymers possessing amide linkages and are named as nylons.

Preparation and uses of some important polyamides are given below:

• Nylon 6: It is obtained by heating caprolactum with water at a high temperature.

It is used for the manufacture of tyre cords, fabrics and ropes.

• Nylon 6,6: It is prepared by the condensation polymerisation of hexamethylenediamine with adipic acid under high pressure and at high temperature. 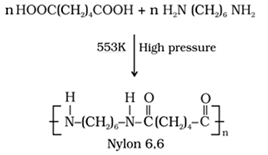 • It is obtained by the condensation polymerisation of melamine and formaldehyde.

• It is used in the manufacture of unbreakable crockery.