Children's Day 2021: Pandit Jawaharlal Nehru is well-known for his love for children and roses. He may not have time for adults but for children, he always had enough time. According to him "Children should be carefully and lovingly nurtured, as they are the future of the nation and the citizens of tomorrow. They are the strength of the country and the foundation of society."

Children's Day is also known as Bal Diwas and is celebrated on November 14 every year to spread awareness among people towards the rights, care, and education of children. Children are the future of the country, the key of success and development which leads the country in a new technological way. They are the god gifts to their parents, innocent, admirable and loved by everyone and also by Chacha Nehru.

Pandit Jawaharlal Nehru was born on 14th November 1889. He was the first Prime Minister of India who ruled the country for the longest period. He was a great follower of peace and prosperity. Pandit Nehru Jayanti is a festival for the country of India. Pandit Jawaharlal Nehru is not only known for his political career or for the service of the country but was also famous among children. His love for children was the same as his love for red roses.

Why is Children’s Day Celebrated on 14 November in India? 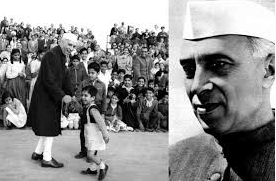 Children’s day is celebrated every year to raise awareness about the rights, care, and education of children. Children are the key to success and development of the country. Jawaharlal Nehru also loves children and he always liked to be in the middle of them. After India's independence, he did a lot of good work for children and youth. When he became the Prime Minister, his first priority was the education of children.

Pandit Nehru worked so much for the education, progress, well being and welfare of the children as well as youngsters of India. He had established various educational institutions such as Indian Institutes of Technology, All India Institute of Medical Sciences and Indian Institutes of Management. Free primary education, free meals including milk were provided to the school children in order to prevent children from malnutrition in India.

According to Pandit Nehru, children are the bright future of the country. Only by the right education, care and progress we can give them a new life. Therefore, after the death of Pandit Jawaharlal Nehru (1964), to commemorate him, the date of his birthday in India ie 14 November started to be celebrated as Children's Day. Therefore, the deep love and enthusiasm of Chacha Nehru towards the children is the big reason for celebrating the Children’s Day at his birth anniversary. He said that children are the country’s actual strength as they would make developed society in the future.

But do you know that after independence and before 1964, Children's Day in India was celebrated on 20 November. Let us see the reason behind it.

The foundation of Children's Day was laid in 1925 and in 1953, it was recognized worldwide.

How is Children's Day celebrated in India?

A lot of programs including cultural and fun activities are organised all over India. Government and non-government organisations, schools, NGOs, private bodies and other conduct a variety of competition for the children to let them known about their rights and make them happy and cheer. TV channels also demonstrate the interesting programs for the children on the 14th of November. Parents take part in this event very enthusiastically to make their children happy; they distribute gifts, greeting cards to their sons and daughters. They go on a picnic, long drive and enjoy the day with the party.

How is Children's Day celebrated with orphans and underprivileged children in India?

Many Non-Governmental Organizations organise programs for the poor and deprived children. Children are distributed gifts and chocolates. Varieties of competitions are organised such as fancy dress, debates, speech related to the freedom fighters, country, storytelling, and quizzes.  Cultural and social programs like singing, dancing and entertaining with other musical instruments are part of it.  Children can be entertained by distributing clothes, toys, musical instruments, stationery, books, etc.  Organising some game activities including puzzles, treasure hunt, etc. are of great amusement. Underprivileged children are entertained by organising musical programs by famous musicians and speeches on health, care, and progress.

What are the intentions behind the celebration of Children's Day in India?

The future of the country depends on children. If they do not develop in a proper way, the country's future will be ruined. People who neglect their children will get an opportunity on this day to think about it. The whole society should think about its duty and responsibility towards children. It is necessary to analyse what has been done in the past and what can be done in the coming years for the children.

Important Days and Dates in November 2021