Difference Between UPSC and State PSC

You would have often heard about the UPSC and State PSC conducting various exams at the central and state levels respectively. But do you know what are the major differences between these two commissions? Read ahead to know in detail. 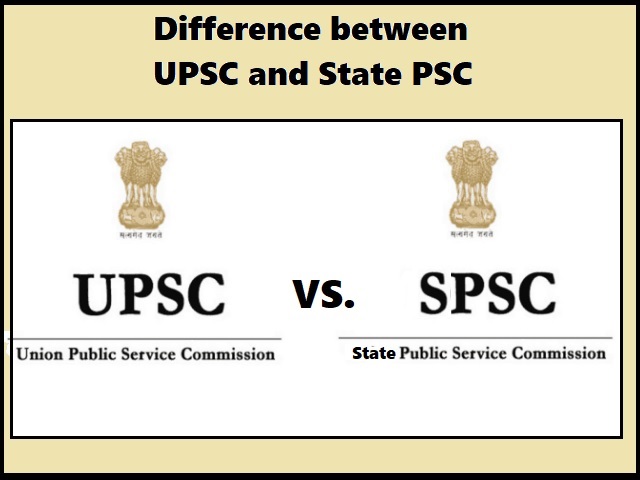 Difference Between UPSC and State PSC

Each year lakhs of aspirants apply for various government services through different competitive exams. These exams are conducted by various departments as per the services. Two such important departments are Union Public Service Commission (UPSC) and various State Public Service Commissions. These state commissions are designated to all states of India and recruit candidates within the state cadre. Let’s now briefly understand the meaning, working, and other important differences between these organizations.

Also Read: What is the difference between IAS Officer and PCS Officer?

Important -  Articles 315 to 323 of the Constitution deals with the composition, appointment and removal of members, power and functions, and independence of the Union as well as the State Public Service Commission.

Important - As per Article 317, subject to the provisions of clause (3), the Chairman or any other member of a Public Service Commission shall only be removed from his office by order of the President on the ground of misbehavior after the Supreme Court, on a reference being made to it by the President, has, on inquiry held in accordance with the procedure prescribed in that behalf under Article 145, reported that the Chairman or such other member, as the case may be, ought on any such ground to be removed.

Important - The Union Public Service Commission (UPSC) conducts Direct Recruitment (through Structured Examination and Direct Recruitment by Selection) to various Group ‘A’ and Group ‘B’ (Gazetted) posts based on the number of vacancies reported by the Union Territories. Hence, there is no separate state commission or UT commissions for the eight Union territories of India.