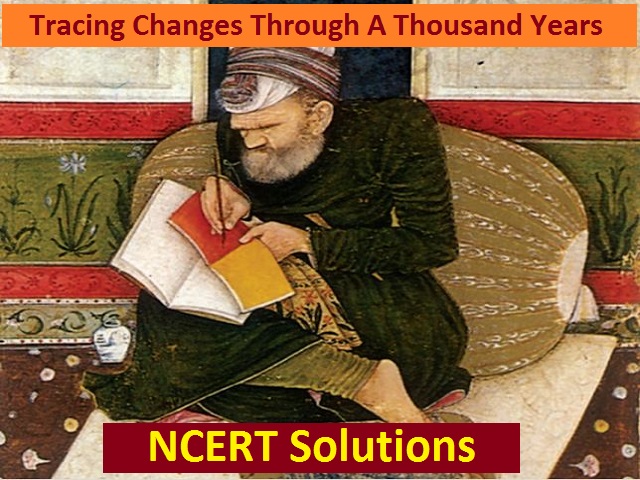 NCERT Solutions for Class 7 Social Science History Chapter 1 - Tracing Changes Through A Thousand Years include the accurate and simple answers that will help you understand the concepts easily and continue your studies without a doubt. We have provided here the solutions to all questions given in chapter 1 of the latest NCERT Book for Class 7 History. These solutions will also help you to score higher marks with the help of well-illustrated answers. All the questions and answers are provided here in PDF format.

Check below the NCERT Solutions for Class 7 History Chapter 1 - Tracing Changes Through A Thousand Years:

1. Who was considered a “foreigner” in the past?

Any stranger who did not belong to a certain society or culture and was not a part of that particular village was regarded as a foreigner. For example, a forest-dweller was a foreigner for a city-dweller. But two people belonging to the same village were not foreigners in spite of their different religious or caste backgrounds.

(a) We do not find inscriptions for the period after 700.

(b) The Marathas asserted their political importance during this period.

(c) Forest-dwellers were sometimes pushed out of their lands with the spread of agricultural settlements.

(a) False; Historians rely on coins, inscriptions, architecture and textual records for information for the study of period from 700 to 1750.

(d) False; Sultan Ghiyasuddin Balban (1266-1287) ruled a vast empire that stretched from Bengal (Gauda) in the east to Ghazni (Gajjana) in Afghanistan in the west and included all of south India (Dravida).

(a) Archives are places where manuscripts are kept.

(b) Ziyauddin Barani was a fourteenth-century chronicler.

(c) Potatoes, corn, chillies, tea and coffee were some of the new crops introduced into the subcontinent during this period.

4. List some of the technological changes associated with this period.

Some of the technological changes that were associated with this period are mentioned below:

(i)  Use of spinning wheel in weaving

(ii) Use of Persian wheel in irrigation

(iii) Use of firearms in combat

5. What were some of the major religious developments during this period?

Some of the major religious developments during this period include:

(i) Worship of new deities

(ii) Building of new temples by the royalty

(iii) Increasing importance of Brahmanas; the priests, as dominant groups in society.

(iv) The emergence of the idea of bhakti among people.

(vi) Teachings of the holy Quran were brought by the merchants and the migrants in India.

6. In what ways has the meaning of the term “Hindustan” changed over the centuries?

The meaning of the term ‘Hindustan’ has changed over the past centuries in the following different ways:

(i) In the 13th century,  The term ‘Hindustan’ was used for the first time by Minhaj-i Siraj, a thirteenth century Persian chronicler. With this term, he meant the areas of Punjab, Haryana and the lands between the Ganga and Yamuna.

(ii) During the 14th century, the term ‘Hind’ was used by Amir Khusrau to refer to the culture and people of the Indus river.

(iii) During the early 16th century, Babar used the term ‘Hindustan’ to describe the culture, geography and fauna of the inhabitants of the sub-continent.

Thus, earlier, the term "Hindustan" was used to represent the geographical and cultural entity but it did not carry the political and national meanings which we associate with it today.

7. How were the affairs of Jatis regulated?

People belonging to Jatis (the sub-castes) were ranked on the basis of  occupations and backgrounds. The affairs of Jatis were regulated in the following ways:

8. What does the term pan-regional empire mean?

The term pan-regional empire is referred to an empire spanning diverse regions. The dynasties of the Mughals, Cholas, Khaljis and the Tughluqs were extended over pan-region.

9. What are the difficulties historians face in using manuscripts?

During the past, the historians faced a lot of difficulties in using the manuscripts which were as follows:

10. How do historians divide the past into periods? Do they face any problems in doing so?

Historians divide the past into periods on the basis of economic and social factors to characterise the major elements of different moments of the past.

Yes, the historians face a lot of problems because economic and social factors do not exist in a stasis, they have a tendency to change constantly. In the period from 700 to 1750, Indian history witnessed a considerable change. After all, the sixteenth and eighteenth centuries were quite different from the eighth or the eleventh. Therefore, describing the entire period as one historical unit is not without its problems. Moreover, the “medieval” period is often contrasted with the ‘modern’ period. The term ‘modernity’ implies a sense of material and intellectual progress. This further implies that there was no progress before, which is not true. This seems to suggest that the medieval period was lacking in any change whatsoever. But we know that this was not the case.

Download all the NCERT Solutions for Class 7 History Chapter 1 from the following link: