Jammu & Kashmir no more a State; it is bifurcated into two Union Territories - Ladakh & J&K.  Know the changes here that will be now seen in Jammu & Kashmir and Ladakh as well. 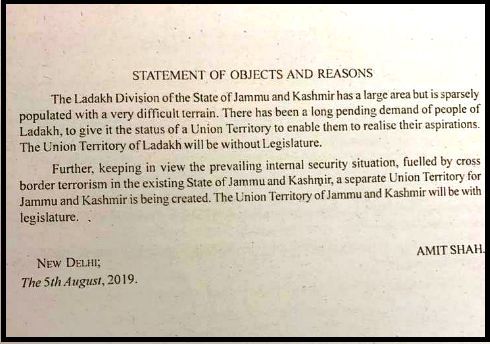 With this move, there are now 9 Union Territories and 28 States in India. The decision came after President Ram Nath Kovind issued Government Order in Jammu and Kashmir Gazette, scraping Article 370, except Clause 1 which states that J&K is a part of India. With the revocation of Article 370, Article 35A gets revoked as well.

Article 35A Scrapped: What is it and why it has been controversial?

What does the status of UT imply for J&K?

Now, there will be no separate elections and any amendment won't need the nod of Kashmir Assembly anymore.

Difference between State and Union Territory

On the other hand, Article 35A defines Jammu & Kashmir "permanent residents" and provides special privileges to permanent residents of J&K such as employment, acquisition of property, scholarships, settlement and so much more.