Army Recruitment Rally to Begin in Jammu & Kashmir from April

Army Recruitment Rally in J&K for Srinagar will begin from 04 April 2017 to 12 April 2017 and for Jammu the rally will take place from 06 May to 22 May 2017. The Indian Army has announced new jobs through a hiring program, called recruitment rallies. 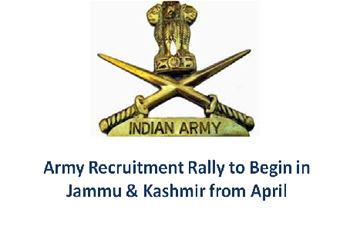 Army Recruitment Rally in J&K for Srinagar will begin from 04 April 2017 to 12 April 2017 and for Jammu the rally will take place from 06 May to 22 May 2017. The Indian Army has announced new jobs through a hiring program, called recruitment rallies. This recruitment process is carried out to hire soldier GD, Clerks, Tradesmen and others. All the students who have completed their Class X and Class XII and wish to join Indian Army can make an attempt through these rallies. For the same the Indian Army has decided to hold Bharti rally for all districts of Jammu and Kashmir under ARO Jammu and ARO Srinagar. These rallies will be held on a massive scale at separate pre-decided venues.

The locations of Pattan, Akhnoor and Karu will be covered for the year 2017. The rallies will be conducted district wise. Under ARO Jammu Kathua, Doda, Kishtwar, Jammu, Poonch, Ramban, Rajouri, Reasi, Samba and Udhampur, apart from that districts to be covered under ARO Srinagar are Srinagar, Anantnag, Bandipora, Budgam, Baramulla, Ganderbal, Kulgam, Kupwara, Shopian, Leh among others.

This provides for a unique opportunity for all eligible and interested applicants to appear and secure government jobs for themselves at such a young age. The minimum educational qualifications required for the posts of Soldier GD is a 10th Class pass certificate with 45% marks in aggregate along with 33% marks in each subject. For applicants of higher qualification like 12th pass and above the percentage limit is waived off. For the post of Soldier Clerk and Soldier Technical an applicant must have 50% marks in aggregate with at-least 40% marks in each subject apart from that for the post of Tradesmen an applicant must possess Class 10th or 8th pass certificate from a recognized School. The last date of submission of applications for the recruitment process was 19 March 2017 for ARO Srinagar Rally but applications are still open for the ARO Jammu rally till 20 April 2017.

Check out the entire schedule here

For more Army Related jobs, you can read below.