CBSE Sample Paper 2018 for 12th Political Science is available here for download in PDF format. Here, you will also find Marking Scheme of this Sample Paper. This Sample Paper is very important for CBSE board exam 2018.

Complete CBSE Class 12 Political Science Sample Paper 2018 is given below:

(a) All questions are compulsory.

(f) Question no 21 is a map –based question. Write its answer in your answer book

Which of the following statements about the NIEO is false?

(a) Give the LDCs control over their natural resources

(c) Reduce the cost of technology from the Western countries

(d) Provide the developed countries with a greater role in international economic institutions. (1)

Why was SAARC established? (1)

How was Kerala plan based on decentralized planning? (1)

How the aim of India to respect the sovereign did find an echo in the Directive Principles of the State Policy? (1)

Highlight the major objective of UNFCCC. (1)

Mention the military alliances formed by the Western Block. (2)

“The Partition of India appeared to prove everyone in worst fears” How far do you agree with this statement? (2)

With which objectives DMK made its entry into Indian politics? (2)

Why do the people in the SAARC countries share the aspiration for democracy? (4)

What is resource geopolitics? How is global economy relied on it? (2+2= 4)

Identify the factors that contributed to the dominance of the Congress Party during the early years of independence. (4)

‘China has been the fastest growing economy since the reform first began there’. Justify. (4)

Examine the major outcomes of the Green Revolution. (4)

How did the factional rivalry between the Syndicate and Indira Gandhi resulted in the split of Congress in 1969. (4)

The Central Asian countries wanted to take advantage of their geographical location and continue their close ties with Russia and also to establish ties with the West, the US, China and others. Thus, the international system saw many new players emerge, each with its own identity, interests, and economic and political difficulties. It is to these issues that we now turn.

(a) Why did the Central Asian countries want to maintain ties with both Russia and the West? (1)

There has been an attempt in India to develop its economy in a way that the vast mass of citizens are lifted out of poverty and misery and huge economic inequalities are not allowed to exist. The attempt has not quite succeeded; we are still a very poor and unequal country. Yet democratic politics allows spaces for articulating the voice of the poor and the deprived citizens. There is a pressure on the democratically elected governments to combine economic growth with human development. Thus democracy is not just a political ideal; a democratic government is also a way to provide greater security

(a) Mention the major security threats to India. (2)

(b) Highlight the broad components of security strategy of democratic India. (3)

India wanted to generate atomic energy for peaceful purposes. Nehru was against nuclear weapons. So he pleaded with the superpowers for comprehensive nuclear disarmament. However, the nuclear arsenal kept rising.

When Communist China conducted nuclear tests in October 1964, the five nuclear weapon powers, the USSR. USA, UK, France and China (Taiwan represented china) impose the Nuclear Non-proliferation Treaty (NPT) of 1968 on the rest of the world. India always considered the NPT as discriminatory and had refused to sign it. When India conducted its first nuclear test, it was termed as peaceful explosion. India argued that it was committed to the policy of using nuclear power only for peaceful purposes.

(a) What was the plea of Nehru with regard to nuclear energy? (1)

(b) When did India conduct s its first nuclear test and why? (2)

(c) Why India always considered the NPT as discriminatory and had refused to sign it? (2) 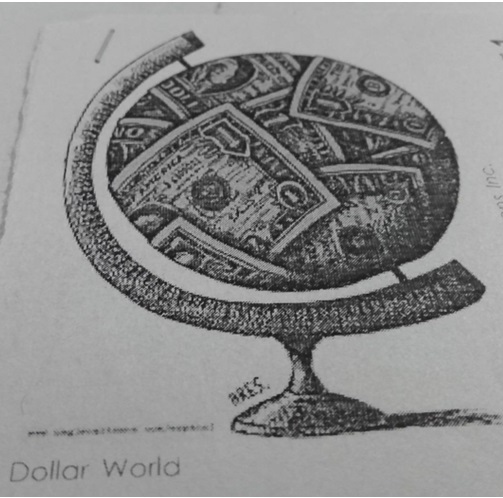 (b) What does this cartoon say about the nature of hegemony? (2)

(c) Mention any two examples of its structural power. (2)

Note. The following question is for the visually impaired children in lieu of Q20

(a) Which country in the world is having global dominance (1)

Question21: In the given political outline map of India, five states have been marked as

(A), (B), (C), (D) and (E). Identify these states on the basis of the information given below and write their correct names in your answer book along with their respective serial number of the information used and the concerned alphabets as per the following format. 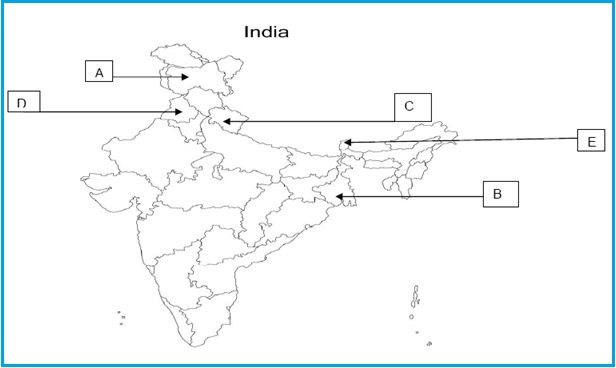 (ii) State which is related with article 370 of Indian constitution

(iv) State where The Operation Blue Star was launched

(v) State which is highly affected the Naxalites

Note. The following question is for the visually impaired children in lieu of Q21

(i) Why was operation blue star launched? (2)

(ii) How was the Naxalite movement splintered into various political parties and organizations of India? (2)

(iii) Which sections of Indian society are most affected by the chipko movement? (1)

Describe the factors that led to the disintegration of USSR (6)

Explain the relevance of NAM in the contemporary scenario. (6)

India has supported the restructuring of the UN on several grounds.’ Justify the statement with three suitable arguments (3+3=6)

‘The European Union has economic, political and diplomatic, and military influence’. Substantiate the statement (3+3=6)

Examine the economic implications of globalization? How has globalization impacted on India with regard to this particular dimension? (3+3=6)

Examine the multi-pronged Issues related to the rights of the indigenous communities. (3+3=6)

Why did India and China both view themselves as rising powers in the global politics in spite of tensions between them? Substantiate your answer by giving any four areas that have brought cordiality in their relationship (6)

Analyze the relationship between India and Pakistan. (6)

Describe the three major issues in the North-Eastern States of India. (6)

Analyze five developments made a long-lasting impact on Indian politics during 1980s. (6)

‘Emergency is one of the most controversial episodes in Indian politics.’ Analyze three reasons and three consequences of it. (6)