Contrary to the popular belief, the three wings of the Indian Armed Forces i.e., Army, Navy and Air Force; all induct female candidates in key roles in the defence organization of the country. 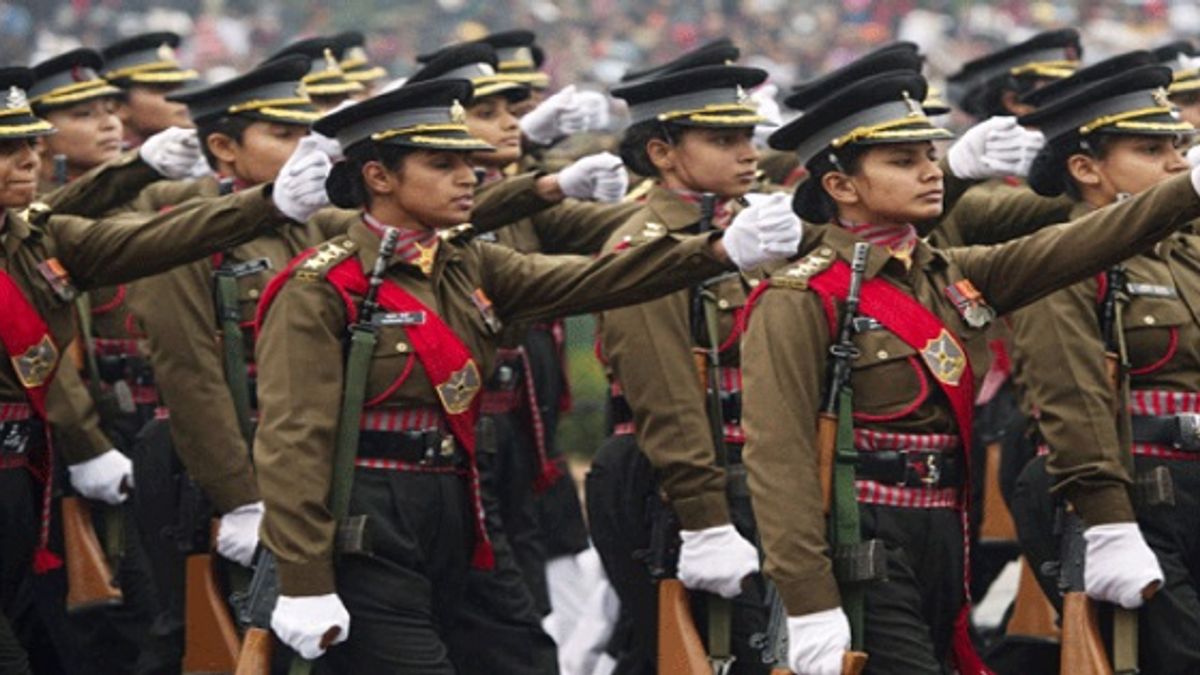 As kids, be it girls or boys, we have all grown-up dreaming of serving our country; and what better way to do it than joining the Indian Armed Forces. Be it films like Lakshya or Border; we Indians have always held the Indian Armed Forces in high regard and have revered them as the best the country has to offer. But, whenever we think of the Indian Army, Navy or the Air Force; it is the men in uniform that dominate our thoughts and not the women.

While there is quite a bit of awareness regarding job opportunities available to male candidates vying for jobs with the Indian Defence Forces, the same cannot be said about female candidates. Contrary to the popular belief, the three wings of the Indian Armed Forces i.e., Army, Navy and Air Force; all induct female candidates in key roles in the defence organization of the country.

Below, we have pointed out all the key positions, sectors and divisions in which the Indian Armed Forces recruit women candidates.

SSCW – Non Tech (Short Service Commission for Women - Non Technical): The Indian Army recruits 12 female candidates as officers through open recruitment test, which is held twice in a year by the UPSC. Unmarried women candidates wanting to join the Indian Army through this scheme need to fall in the age group of 19 to 25 yrs. In addition to this, they also need to fulfil the academic requirement of graduation from a recognized university.

SSCW (NCC): Female NCC cadets can also join the Indian Army under this special entry scheme of SSCW – NCC. The Indian Army recruits 8 unmarried female NCC cadets, who have completed 2 years service in NCC senior division and hold minimum B grade in C certificate exam. As far as age is concerned, the cadets have to be within 19 to 25 years. Academically, candidates need to hold graduation degree with minimum aggregate of 50% marks. The vacancy for through this entry scheme is notified through by Directorate General Recruiting / AG Branch in Jun and Dec.

SSCW (JAG – Judge Advocate General): Women officers are also inducted into the Indian Army for handling the legal formalities under the Judge Advocate General Branch. Popularly known as JAG entry scheme, the Indian Army recruits 8 female candidates under this scheme every year. The eligibility requirement for SSCW-JAG is age between 21 to 27 years and a valid LLB / Law Graduate degree with 55% marks. In addition to this, the candidate should be registered with Bar Council of India or state. The recruitment is done through the additional directorate general recruiting in the month of April or October.

SSCW – Technical Entry Scheme: The Short Service Commission Women also has a technical entry scheme under which engineering students are inducted in the Indian Army. Female Engineering students falling in the age group of 20 to 27 years (as per notified in the advertisement) are eligible for entry under this scheme. Academic requirements include graduate degree in any discipline of engineering. Every year, the Directorate General Recruiting / AG Branch, hires 40 women engineers under this scheme during the months of Jun / Jul and Dec/Jan.

Military Nursing Service: The Military Nursing Service is another important way in which women candidates can join the Indian Army and sever the country. Under this, female candidates between 21 to 35 years can apply for nursing jobs with the Indian Army. Academically, the candidates need to complete MSc (Nursing) /PB B Sc (Nursing)/B Sc (Nursing). In addition to this, the candidates also have to be a registered Nurse and Midwife from a State Nursing Council. After the completion of SSC, the MNS women officers can also get a permanent commission, subject to interview and availability of vacancies in the Cadre.

Female aspirants, who have the passion and courage to serve their country by joining the Indian Navy have good opportunities available in their kitty. Currently, the Indian Navy inducts female candidates under the short service commission entry scheme. However, upon completion of their SSC tenure, the women naval officers can also be given Permanent Commission, depending upon the number of vacancies, merit and their personal performance.

Women can have lucrative career options with the naval wing of Indian armed forces under different categories like Law, engineering / naval architecture, education and others. We have discussed each of them and the academic eligibility to join them below:

ATC: Air Traffic Controller is a very important position within the Indian Navy. Female candidates falling within the age group of 19 ½ to 25 years are eligible to seek employment for this. For academic requirements, the candidate must have completed their graduation or post graduation in Science stream i.e. Physics/Maths/Electronics.

Observer: For the post of observer, the female candidates need to fall within the age group of 19 to 23 years. As far as academic requirements are concerned, a graduate degree in any discipline with minimum 55% marks and Maths and Physics at 10+2 level is compulsory.

Law: To handle the legal processes concerning the Indian Navy, female candidates can join the Law wing of the service. Any female law graduate within the age group of 22 to 27 years is eligible to apply for this post. The law degree must be completed with aggregate 55% marks.

Logistics: If logistics is something that interests you, this one is for you. Women candidates having valid engineering graduate degree (B.Tech / B.E) in Architecture, Computer Engineering, IT, Civil, Electrical, Marine and Mechanical can apply for this. Alternatively, candidates who have completed a PG Diploma programme in material management are also eligible. The age requirements is 19 ½ to 25 years as per notified in the advertisement.

Education: The education branch of the Indian Navy also hires female candidates. For this role, women candidates have to be within the age group of 21 to 25 years to fulfil the mandatory eligibility criteria. Academically, the candidate needs to complete B.Tech / B.E in Computer Science, Electrical, IT, Electronics, Mechanical or M.Sc in Math, Physics, computer applications and others with minimum 50% marks.

Naval Architecture: The Indian Navy also accepts women engineers who have the passion to create engineering marvels as well as for the upkeep of the already commissioned machinery. To join the naval architecture wing of the Indian Navy, candidates need to fall within the age group of 21 to 25 years. Along with this, they also need to clear their B.Tech / B.E. in Naval Architecture, Mechanical, Civil, Aeronautical, Metallurgical, Aerospace Engineering with minimum 60% aggregate marks. Women engineers are hired through SSC / University Entry Scheme in the Indian Navy.

The Indian Air Force offers employment opportunities to women candidates to sever the country by joining the IAF. Currently, the entry of female candidates is open to all the three branches i.e., Flying Branch, Technical Branch and Ground Duty Branch. The general work description and academic requirements for different posts available in these three branches are mentioned below:

If you had dreams of serving India soaring high in the sky as a fighter pilot; the Flying Branch is something that you should consider joining. All the Air Warriors of IAF are recruited through the AFCAT. Women candidates falling in the age group of 19 to 23 years (as notified in the advertisement) can apply for Flying branch under the three categories of fighters, transports and helicopters.

Until June 2016, women were limited to Female candidates were provided the opportunity to fly transport aircrafts or helicopters but not the fighter aircrafts. However, in a landmark step, the IAF had inducted its first batch of women pilots into its fighter squadron this year. The minimum height to apply to this branch is 162.5 cms. As far as academic qualifications are concerned women candidates need to fulfil the following:

In order to provide technical support to the Indian Air Force, expert and qualified engineers are hired by the force through the AFCAT examination. Under the Technical Branch, the IAF hires female candidates as well in two types of technical services as mentioned below:

Mechanical: For the Mechanical Engineering Wing, an aeronautical engineer with specialization in mechanical domain is hired by the IAF. The eligibility requirement for a candidate willing to join Mechanical wing is:

Electronics: Women candidates can also join the Indian Air Force as an Electronic Engineer if they qualify the following conditions:

Indian Air Force also requires several people to support their daily operations on the ground. To cater to this requirement, the force has opened up job opportunities in the Ground Duty section to women candidates as well. Currently, women candidates can seek employment with the IAF at in administration and logistics wing, accounts section, education and meteorology wing. The height of the women applying to Ground Duty branch should be at least 152cm. The weight of the candidate should be correlated. The general description and educational eligibility required for these posts are mentioned below:

Administration Wing: Like any other professional organization, the Indian Air Force also has a dedicated administration wing that looks after the smooth functioning of day-to-day affairs. Women can join the administration wing of the IAF through the AFCAT if they qualify the following academic criteria.

Accounts Wing: Women candidates can also join the accounts division in the Indian Air Force through AFCAT if they hold.

Logistics Wing: Just like administration, the logistics section also looks after the arrangement of logistical and infrastructural facilities for the Indian Air Force. Women can join the administration wing of the IAF through the AFCAT if they qualify the following academic criteria.

Education Branch: Women wanting to join the education wing of the Indian Air Force through AFCAT, should possess a post-graduate degree in any discipline with aggregate of 50% minimum marks.

Meteorology Branch: Candidates (including women) are hired to the Meteorology Branch of the IAF through SSB and not AFCAT. For this, the Air Force Selection Board shortlists candidates and calls them for SSB Interviews.