AAP Chief Arvind Kejriwal took oath as the Delhi Chief Minister for the third consecutive term on February 16, 2020. He was sworn in at Delhi's Ramlila Maidan amidst heavy security. The Lieutenant Governor of Delhi, Anil Baijal administered the oath of office to the new CM.

Arvind Kejriwal is the first Delhi Chief Minister to take oath from the Ramlila Maidan, as previously all Delhi CMs were sworn in at the Raj Niwas. Kejriwal took oath as the CM for the first time from the venue after the 2013 Delhi Assembly Elections.

Six cabinet ministers were also sworn in along with the Chief Minister. The Ministers include former Deputy Delhi CM Manish Sisodia, Gopal Rai, Kailash Gehlot, Satendra Jain, Rajendra Pal Gautam and Imran Hussain. All the six ministers were a part of the previous Delhi Cabinet. The AAP Chief had invited 50 people from different walks of like including bus marshalls, teachers, doctors and architects of the Signature Bridge to join him on the stage during the oath-taking ceremony.

Prime Minister Narendra Modi was also invited for the swearing-in ceremony. However, the Prime Minister is in Varanasi and is scheduled to inaugurate 30 projects in the city.

• Arvind Kejriwal took oath as the Chief Minister of the National Capital for the third time,

• Manish Sisodia was sworn in next as a cabinet minister. Sisodia formerly served as the Deputy Chief Minister of Delhi. He is likely to retain the post. 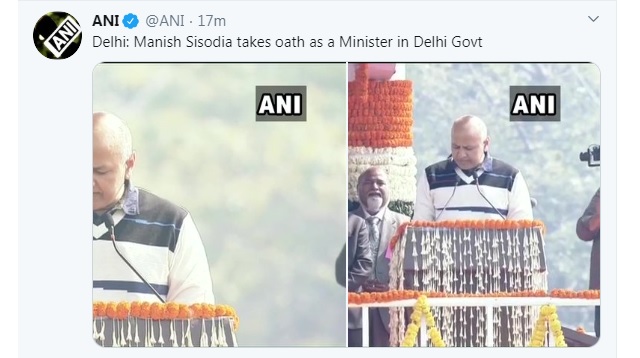 • The second cabinet minister to be sworn-in was Satendra Jain, who was the health minister in Kejriwal's previous cabinet.

• The third cabinet minister to be sworn-in was Gopal Rai, who was a senior minister in the previous cabinet, handling several important portfolios including irrigation, employment and labour. Gopal Rai is also the chief of AAP's Delhi unit.

• The fourth cabinet minister to take oath was Kailash Gahlot, who was the transport minister in the previous cabinet.

• Imran Hussain was the fifth cabinet minister to be sworn in along with the Chief Minister. He was previously the environment minister of Delhi.

• The sixth cabinet minister to be sworn-in was Rajendra Pal Gautam, who was formerly the Minister for Water, Tourist, Culture, Arts and Languages in the previous Delhi cabinet.

Arvind Kejriwal was sworn in as the Chief Minister of Delhi for the first time in 2013 from the Ramlila Maidan. However, he resigned after spending just 49 days in office.

Delhi went to polls again in 2015 and Arvind Kejriwal’s AAP returned to power, this time with a landslide majority by winning 67 out of the total 70 assembly seats. Kejriwal took oath as the Chief Minister of Delhi for the second time on February 14, 2015, again from the Ramlila Maidan.