The government has approved a proposal to construct Vadhavan Port in Maharashtra. 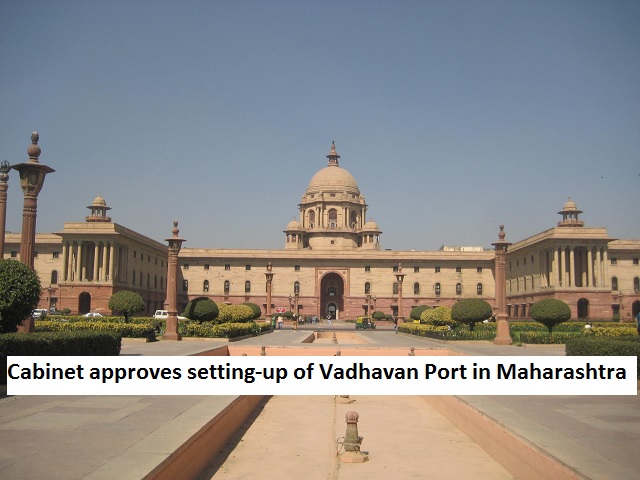 Vadhavan Port in News: The Union Cabinet gave in-principle approval for the establishment of a new major port at Vadhavan, Maharashtra. The Vadhavan port will be developed on the 'Landlord Model'. A Special Purpose Vehicle (SPV) to be set up to provide the necessary infrastructure to the port.

The SPV will develop port infrastructure including land reclamation, construction of the breakwater, besides establishing connectivity with the interstate. All business activities will be done by private developers under the PPP model.

The natural draft at the Vadhavan Port near the coast is about 20 meters, which is expected to maintain large ships at this port. The development of the Vadhavan port will house the container ships of 16,000 to 25,000 TEU capacities. According to the government report, the total cost of Vadhavan Port project is about Rs.65, 544.54 crores.

Jawaharlal Nehru Port Trust (JNPT) is the largest in India. It is ranked 28th in the world and has a traffic of 5.1 million TEUs (Twenty-Foot Equivalent Units). Jawaharlal Nehru Port will be the 17th largest container port in the world even after the completion of the fourth terminal with capacity addition of 10 million TEUs by 2023. India will join the top 10 container port countries in the world after the development of the Vadhavan port. It caters to the needs of Maharashtra, North Karnataka, Telangana and secondary enclaves of Gujarat, Madhya Pradesh, Rajasthan, NCR, Punjab, and Uttar Pradesh.

It becomes extremely important to develop a deep draft port on the western coast of India due to the ever-increasing size of container ships. Increasing containerization of cargo makes it very important to prepare our port infrastructure for exports to help in value addition.