Addu is one of the most beautiful sites of Maldives’26 coral atolls. It comprises more than two dozens of Maldives’ 1192 islands. 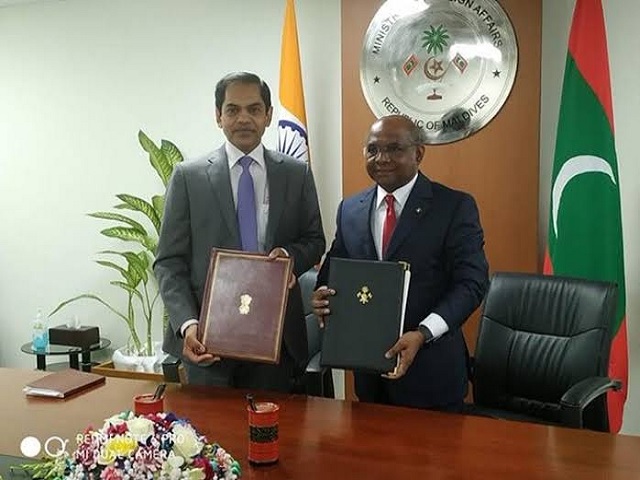 India and Maldives signed five memorandum of understanding (MoUs) on February 02, 2020. The objective of this MoU is to establish the Addu tourism zone on the five islands of Addu Atoll in the Maldives. It will cost twenty-four million ninety thousand dollars.

• Addu is one of the most beautiful sites of Maldives’26 coral atolls. It comprises more than two dozens of Maldives’ 1192 islands. Addu is also an important site for tourism because it represents the southernmost point of South Asia. About 10% of actual Maldives residents are living here with unique culture and dialect.
• India is expanding its tourism and infrastructure development limits through off-shore development works. Addu Tourism Zone will increase India’s capacity for infrastructure building. Addu Tourism Zone will bring national and international tourists and diplomats that will boost India’s and Maldives’ tourism sector.
• Indian citizens are second among people coming to the Maldives to visit from all over the world. According to the official figures released by Maldives Tourism Minister Ali Waheed, 82,140 Indian tourists went to visit the Maldives in the first six months of 2019.

India-Maldives relations refer to a long time bilateral relations between both countries. This relationship has been friendly and close in strategic, economic and military cooperation. Almost all the Prime Ministers of India have visited Maldives during their tenure.

India and Maldives began bilateral relations soon after the independence of Maldives from British rule in 1965. India was one of the first countries to recognize the Maldives as an independent nation. India established its diplomatic mission in Male in 1972, the capital of Maldives.