The World Bank on October 31, 2018 released the Doing Business Report 2019 titled as ‘Doing Business 2019: Training for Reform’, assessing and ranking countries on the basis of ease of doing business in the year 2018.

The Doing Business assesses 190 economies and covers 10 indicators which span the lifecycle of a business. It ranks countries on the basis of Distance to Frontier (DTF), a score that shows the gap of an economy to the global best practice.

• Doing Business took note of record 314 regulatory reforms introduced by 128 countries between June 2, 2017, and May 1, 2018 for making it easier to do business in all areas measured by Doing Business.

• The economies with the most notable improvement in Doing Business 2019 are Afghanistan, Djibouti, China, Azerbaijan, India, Togo, Kenya, Cote d’Ivoire, Turkey and Rwanda.

• Brazil, Russia, India and China, the BRICS economies, introduced a total of 21 reforms, with getting electricity and trading across borders the most common areas of improvement.

• The 10 top economies in the ranking share common features of regulatory efficiency and quality including mandatory inspections during construction, automated tools used by distribution utilities to restore service during power outages and automated specialised commercial courts.

• Training opportunities for service providers and users are positively associated with the ease of doing business score. 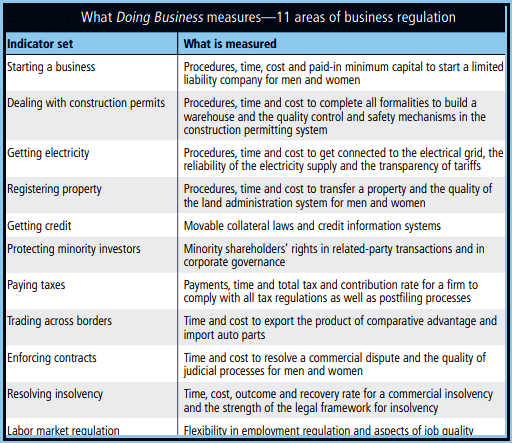