India and Vietnam released a Joint Statement on November 21, 2018 after extensive talks between Vietnam President Nguyen Phu Trong and Indian President Ram Nath Kovind, during the latter’s state visit to Vietnam from November 18-20, 2018.

India and Vietnam released a Joint Statement on November 21, 2018 after extensive talks between Vietnam President Nguyen Phu Trong and Indian President Ram Nath Kovind, during the latter’s state visit to Vietnam from November 18-20, 2018.

He also addressed the Vietnam– India Business Forum and met with the Indian community in the nation. Vietnam is the first south-east Asian nation to be visited by President Kovind since he was sworn into office in July 2017.

Highlights of the Joint Statement

Reinforcement of the Comprehensive Strategic Partnership

The two leaders shared a common vision on further deepening the Comprehensive Strategic Partnership in all areas.

They expressed their satisfaction at the regular exchange of high-level visits and regarded the year 2018 as an extraordinary year, which saw visit by Prime Minister Nguyen Xuan Phuc in January 2018 to attend the ASEAN-India Commemorative Summit in New Delhi and India’s 69th Republic Day celebrations, state visit to India by late President Tran Dai Quang in March 2018 and the visits to Vietnam by Indian Defence Minister Nirmala Sitharaman in June 2018 and the Minister of External Affairs Sushma Swaraj in August 2018.

The two leaders also welcomed the organisation of the various meaningful activities during the 2017 Year of Friendship to celebrate the 45th Anniversary of diplomatic relations and 10th Anniversary of the Strategic Partnership.

They also agreed to maintain the regular and timely organisation of bilateral cooperation mechanisms and to effectively implement the outcomes of high-level visits as well as the signed documents.

The two leaders shared the view that defence and security cooperation has become an important pillar of the Comprehensive Strategic Partnership between the two countries and expressed their satisfaction at the growing defence exchanges in recent years.

The two leaders agreed to effectively implement the Joint Vision Statement on Vietnam– India Defence Cooperation for the period of 2015-2020.

They agreed to step up cooperation in human resources training and promote collaboration between the Army, Air Force, Naval and Coast Guard of the two countries, as well as cooperation in cybersecurity and information sharing.

The two leaders expressed their satisfaction at the progress of the implementation of the US$100 million Line of Credit for the building of high-speed patrol vessels for the Vietnamese Border Guards.

The Vietnamese side appreciated Indian’s offer of the US$500 million Line of Credit to the defence industry and agreed to accelerate procedures for its approval. 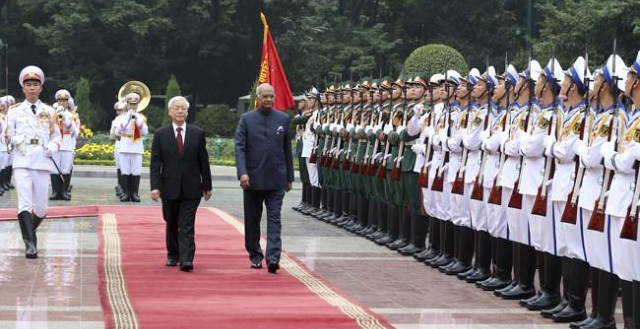 The two sides agreed to step up experience sharing in the training of personnel for participation in the United Nations peace-keeping operations and cooperation in addressing war legacies in Vietnam and to strengthen criminal information exchange and law enforcement experience sharing.

They also agreed to actively support each other and step up coordination at multilateral defence and security cooperation frameworks, particularly ARF and ADMM.

Both sides also agreed that it is essential to strengthen cooperation in the maritime domain including anti-piracy, security of sea lanes and exchange of white shipping.

The two leaders expressed pleasure with the rapid growth of bilateral trade since relations were upgraded to Comprehensive Strategic Partnership and expressed their confidence that the target trade volume of US$15 billion would be achieved.

They called for the reduction of trade barriers including non-tariff and technical barriers. They also stressed on the need to engage in close coordination as well as periodic consultations to address bilateral trade issues.

They agreed to continue promoting bilateral investment, including cooperation projects between PVN and ONGC in oil and gas exploration on land, continental shelf and Exclusive Economic Zone (EEZ) of Viet Nam and encouraged the two sides to be more active in identifying models for cooperation, including those involving third country.

The Vietnamese side welcomed and agreed to create facilitating conditions for Indian companies to invest into new thermal energy and renewable energy projects in Viet Nam.

The two sides agreed to focus on the timely implementation of grants-in-aid and preferential credit lines that the Indian Government has pledged to Vietnam, as well as the annual projects under the CLMV Quick Impact Projects (QIPs) Fund.

In return, the Indian President reaffirmed the Government’s commitment to providing around 200 annual scholarships to Vietnam through the Indian Technical and Economic Cooperation Program (ITEC) and 30 scholarships through cultural exchange programme and general cultural scholarship scheme (CEP/GCSS) Program.

Further, Vietnam’s President appreciated PM Modi’s announcement of undertaking a pilot project on rural connectivity in the CLMV countries to create digital villages and for offering 1000 fellowships to students and researchers from the ASEAN Member States for studying integrated Ph.D. programmes in Indian Institutes of Technology.

They agreed to step up the implementation of agreements signed and to hold the first meeting of the Joint Committee at the earliest.

They also agreed to soon hold the next meeting of the India-Vietnam Joint Committee on Science and Technology, establish a suitable mechanism for joint research activities, hasten the implementation process for ongoing projects and continue the exchange of delegations and the sharing of experience in scientific and technological development between the two countries.

They also agreed on the importance of stronger connectivity between Vietnam and India and urged utilisation of the US$1 billion credit line for physical and digital connectivity projects under the India-ASEAN cooperation framework and called for an early mechanism between the two sides to enable utilisation of the Line of Credit for projects in Vietnam.

The Indian President expressed his appreciation to Vietnam for the collaboration in the organisation of events celebrating the 150th birth anniversary of Mahatma Gandhi in 2018.

The President also expressed his appreciation for the close collaboration between the two sides that led to Archaeological Survey of India‘s effective implementation of the Project for the conservation and restoration of three temple groups at the heritage site.

Vietnam’s President welcomed India’s support for the Cham community, including the building of the Cham Community Houses and Schools and Cham culture research programs in Ninh Thuan province.

The two sides further welcomed an agreement signed between the Youth Union of Vietnam and the National Cadet Corps of India. They agreed to maintain the regular exchange of youth delegations on an annual basis to facilitate the exchange of knowledge and experience between the youth.

They also agreed to work on the possibility of establishing Twinning or Sister City arrangements between the important cities of both countries to enhance the exchange of experience and expertise and establish fraternal relations.

They further agreed on the importance of the reinforcement of people-to-people ties by organising film festivals and advancing tourism cooperation.

They also stressed on the role of enhancing connectivity and resolved to facilitate Vietjet Air’s direct flight between Ho Chi Minh City and New Delhi in 2019.

The Vietnamese President also conveyed his appreciation for the efforts of the Indian Government and the Bhagwan Mahavir Viklang Sahayata Samiti in the provision of rehabilitation services and the artificial limb fitment Jaipur foot to around 500 Vietnamese in the provinces of Phu Tho and Vinh Phuc (July 2018) as also for another 500 Vietnamese citizens in a new limb fitment camp in Hanoi to be held later in 2018.

The two sides agreed to organise meetings of joint working groups in healthcare, IT and remote sensing, among others at the earliest, in order to effectively implement the signed Agreements.

They also agreed to ensure continuous and close cooperation for the effective implementation and early operation of the Project for the construction of the Satellite Tracking & Data Reception Station and Data Processing Facility under the ASEAN – India cooperation framework in Viet Nam.

The Indian President placed high value on Vietnam’s contributions as the Country Coordinator for the ASEAN-India relations for the period of 2015-2018 and suggested that the two sides would work together to advance the implementation of the Delhi Declaration of the ASEAN – India Summit.

The President of Vietnam, on the other hand, reaffirmed Vietnam’s support for India’s ‘Act East’ policy, and highly appreciated India’s support for ASEAN's unity.

The two sides agreed to continue their close coordination and mutual support at multilateral forum, particularly within the United Nations.

The Vietnamese side reiterated its consistent support for permanent membership of India in an expanded United Nations Security Council and the Indian side expressed its appreciation for the same.

They emphasised on the importance of peaceful settlement of disputes, including the full respect for diplomatic and legal processes, and complete compliance with international law, particularly the United Nations Convention on the Law of the Sea 1982 (UNCLOS).

The two sides reiterated that the parties concerned should continue exercising self-restraint and refrain from the use of force or threat to use force.

The two leaders unequivocally condemned terrorism in all its forms and manifestations, including cross-border terrorism.

The Vietnamese side shared India’s concern that terrorism is one of the most serious threats to global peace, security and stability.

They underscored that there is no justification whatsoever for act of terrorism and recognised that terrorism cannot be and should not be associated with any religion, nationality, civilisation or ethnic groups.

They called upon all nations to adopt a comprehensive approach in combating terrorism and agreed that they would cooperate in building a strong consensus for early adoption of the Comprehensive Convention on International Terrorism (CCIT).