India’s concerns over China’s One Belt, One Road Initiative

India boycotted the First One Belt, One Road (OBOR) Summit that was concluded recently in Beijing. While boycotting the OBOR, India said, "No country can accept a project that ignores its core concerns on sovereignty and territorial integrity". Against this backdrop, this article analyses the scope of OBOR and India’s concerns over it.

The First One Belt, One Road (OBOR) Summit concluded on 15 May 2017 in Beijing, China. The Summit, showcased China’s plans to build a network of trade routes under the One Belt, One Road initiative to the representatives of 57 participating countries.

As a founding-member of the Asian Infrastructure Investment Bank (AIIB), which is a financial arm of the OBOR, India is supposed to participate in the summit. However, it has boycotted the summit by raising three concerns, which are related to sovereignty, procedures and leadership.

While boycotting the OBOR, India said, "No country can accept a project that ignores its core concerns on sovereignty and territorial integrity".

Against this backdrop, it is pertinent to understand the features of One Belt One Road initiative, its scope and benefits and reasons behind India’s concerns over OBOR. 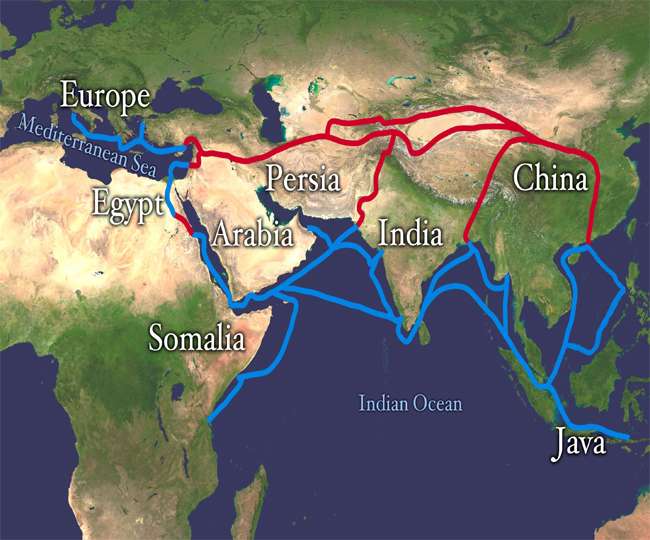 What is One Belt, One Road initiative?

• For the first time, China’s top economic planning agency, the National Development and Reform Commission (NDRC), on 28 March 2015 released an action plan for One Belt, One Road initiative.

• As the name, One Belt, One Road, suggests, the initiative has two parts – Silk Road Economic Belt and 21st Century Maritime Silk Road.

• Silk Road Economic Belt (SREB): It seeks to link China to Europe by cutting through mountainous regions in the Central Asian Region.

• The word Belt is referred as a planned network of overland road and rail routes, oil and natural gas pipelines, and other infrastructure projects.

• This network stretches from Xi’an in Central China, through Central Asia, and ultimately reach as far as Moscow, Rotterdam, and Venice.

• 21st Century Maritime Silk Road (MSR): It is the maritime equivalent of SREB and seeks to link China's port facilities with the African coast and then pushes up through the Suez Canal into the Mediterranean Sea.

• It is a network of planned port and other coastal infrastructure projects that dot the map from the South and Southeast Asia to East Africa and the northern Mediterranean Sea.

What is the Scope of the plan?

• The scope of the OBOR extends well beyond infrastructure construction. It also includes efforts to promote greater financial integration and use of the Renminbi, Chinese Currency, by foreign countries.

• The plan will further extend to create an Information Silk Road linking regional information and communications technology networks, and lower barriers to cross-border trade and investment in the region, among other initiatives.

• New regional institutions, such as the Asian Infrastructure Investment Bank (AIIB) and New Silk Road Fund (NSRF) are also designed in part to complement and support the OROB initiative.

• At present it has 53 members, including India, which is a founding-member of the AIIB.

• In June 2016, AIIB approved first loans for projects in four countries – Pakistan, Bangladesh, Tajikistan and Indonesia – which are worth USD 509 million.

• In May 2017, the AIIB approved USD 160 million loan for a power project in Andhra Pradesh, the first credit from the bank for an Indian project.

• New Silk Road Fund (NSRF): The objective of the NSRF is to foster increased investment in countries along the One Belt, One Road. So far, China has pledged USD 40 billion for the fund and it has become operational on 29 December 2014.

What are the benefits of OROB?

• Many of the infrastructure projects proposed under the OROB run through some of China’s poorest and least developed regions and is expected to provide stimulus to help cushion the effects of the deepening slowdown of China.

• The construction is intended to help make use of China’s enormous industrial over capacity and ease the entry of Chinese goods into regional markets.

• The plan would strengthen China’s importance as an economic partner for its neighbors and, potentially, enhance Beijing’s diplomatic leverage in the region.

• Increased investment in energy and mineral resources, particularly in Central Asia, could also help reduce China’s reliance on commodities imported from overseas, including oil transiting the Strait of Malacca.

Benefits to the Region

• As per the United Nations Development Programme (UNDP), the Belt and Road Initiative represents a powerful platform for economic growth and regional co-operation.

• It touches the lives of more than 4 billion people in 68 countries, many of whom live in developing countries.

• The augmented infrastructure facilities will also help developing and developed countries in the region in achieving the goals set by the 2030 Sustainable Development Agenda.

• Resources of the energy rich countries in the Central Asia Region will help emerging economies like India and China in meeting their energy demands.

• As per the NDRC, the principles of shared interests, destiny and responsibility will help in achieving mutual political trust, economic integration and cultural inclusiveness.

What are India’s concerns?

• As per the Institute for Defence Studies and Analyses (IDSA), which is funded by the Ministry of Defence, the OBOR initiative doesn’t pose an open threat to India’s national security.

• However, as per the IDSA, unravelling the details of the OBOR suggests subtle security concerns and challenges for India.

• In terms of challenge from the SREB, the biggest comes from the China-Pakistan Economic Corridor (CPEC).

• The CPEC project is meant to connect Kashgar in China’s Xinjiang Province with the strategic port of Gwadar in Pakistan. India has always been concerned about the China-Pakistan understanding over the Gwadar Port.

• The CPEC project runs through the strategic Gilgit-Baltistan region in Pakistan Occupied Kashmir (POK), an integral part of India. It portends that China may emerge as a ‘direct party’ in the Kashmir dispute in future.

• Even though China has maintained a somewhat ‘neutral’ position on the Kashmir issue in recent years particularly since the Kargil war, terming it mostly as a ‘bilateral historical dispute’, the Chinese pursuit of the CPEC project may impel it to revisit its position on Kashmir in future.

• As for the MSR, it poses two broad challenges to India –

• First, to India’s presence as a maritime power in the context of the South China Sea and India’s dominance in the Indian Ocean Region (IOR)

• Second, to the maritime understanding evolving in the IOR between India and other powers such as the United States (US), Australia and Japan.

• The Association of Southeast Asian Nations (ASEAN) today expects India to play a larger role. The US too has been urging India to pursue a more active policy in the ASEAN region under its Pivot to Asia Policy. The MSR will certainly be testing India’s maritime influence in the region and the Act East Policy in the coming years.

Since 2015, the Chinese president Xi Jinping has made the One Belt, One Road a centerpiece of both his foreign policy and domestic economic strategy. Undoubtedly, China’s efforts to implement this initiative will have an important effect on the region’s economic architecture—patterns of regional trade, investment, infrastructure development—and in turn have strategic implications for other countries including India.

Given the context, the litmus test for the Indian policy makers lies in the ability to ‘get the most out of this initiative’ without allowing any disruption to India’s interests in the region.