PM Modi has given Fast Interceptor Craft ‘Kaamyaab’ to the Maldives as a gift. He said that it will help to increase the maritime security of the Maldives. 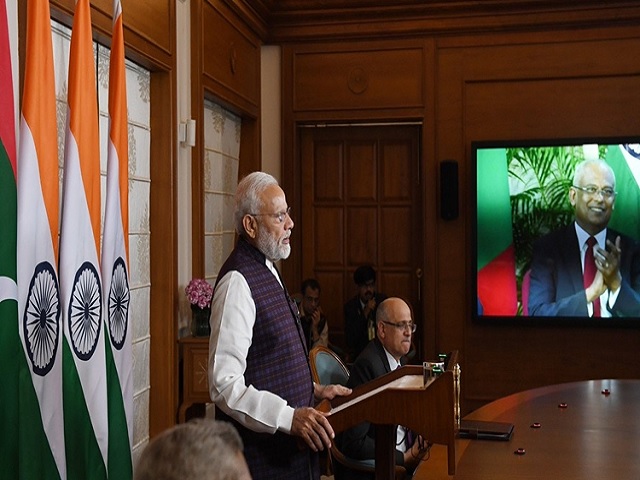 The Indian Prime Minister Narendra Modi and the President of Maldives, Ibrahim Mohammed Saleh jointly inaugurated four important development projects in the Maldives through video conference. PM Modi called it a significant and a landmark year for the bilateral relations of India and Maldives.

These four projects include – Three Fish Processing plants, Launch of RuPay card in the Maldives, Lighting up of Male with LED lights and Fast Interceptor Craft given to the Maldives. PM Modi said that it is the result of the Indian Government’s 'Neighbourhood First' policy and on the other hand Maldives government’s ‘India First’ policy.

• PM Modi has given Fast Interceptor Craft ‘Kaamyaab’ to the Maldives as a gift. He said that this fast interceptor craft Coast Guard ship would help to increase the maritime security of the Maldives and promote the blue economy and tourism in the region.
• The Prime Minister expressed contentment over partnering through 'comprehensive positive impact community development projects' to support the livelihood of the island's community.
• PM Modi highlights that the government is also working on the construction of a cancer hospital and cricket stadium in Hulhumale. Also, the government of India will start work on water and sanitation projects in 34 islands in the Maldives.

Also Read | International Volunteer Day 2019: All you need to know

• India launched the Neighborhood First Policy to address the need for regional integration in South Asia in the era of globalization. ‘Neighbourhood First Policy’ means giving priority to the Neighboring countries.
• India is looking forward to giving political and diplomatic priority to its neighboring countries and island states of the Indian Ocean through this policy.
• The purpose of this policy of India is to encourage such a model of regionalism under the leadership of India, which is favorable to the neighboring countries.
• The focus has been on the development of border areas, better connectivity and cultural development of the region and to encourage mutual interaction of people under this policy.

Also Read | Citizenship (Amendment) Bill 2019: Everything you need to know