The Prime Minister laid the foundation stone of the Catalytic-Isodewaxing Unit at the Haldia refinery of Indian Oil Corporation Limited, which will serve as an import substitution project. 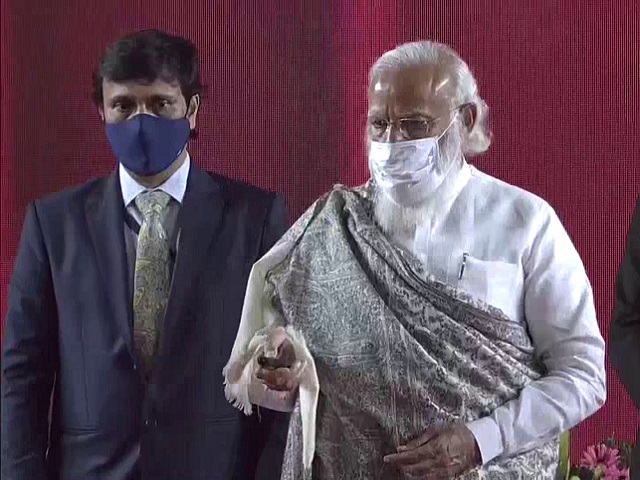 Prime Minister Narendra Modi dedicated four projects worth around Rs 4700 crore in gas, oil and infrastructure sectors during his visit to Haldia, West Bengal on February 7, 2021.

The projects include those of NHAI, Bharat Petroleum Corporation (BPCL),Gas Authority of India (GAIL) and Indian Oil Corporation (IOCL).

The four projects are listed below:

The Prime Minister laid the foundation stone of the Catalytic-Isodewaxing Unit at the Haldia refinery of Indian Oil Corporation Limited, which will serve as an import substitution project.

•The dewaxing unit will produce base oil which is mostly imported.

•It will cost around Rs 1019 crore and the proposed date of completion is April 2023.

•The unit will save foreign exchange of USD 185 million with reduced imports.

The Prime Minister inaugurated BPCL's new LPG terminal at Haldia to meet the growing demand of the eastern region. The terminal was built at a total cost of Rs 1100 crore and its nameplate capacity is one million tonne per annum.

•The pipeline will be built at a cost of Rs. 2400 crore, as per E S Ranganathan, director (marketing) of GAIL.

•It will also provide gas to the city gas distribution projects in major towns of West Bengal.

While addressing the occasion, the Prime Minister said that a gas-based economy is the need of the hour for India. He said that one nation-one gas grid is an important step towards achieving a gas-based economy. To achieve this, PM Modi said that the focus is on reducing the cost of natural gas and expanding the gas-pipeline network.

He further said that India is among the highest gas-consuming nations and the Hydrogen Mission was announced in the budget to promote cheap and clean energy. The Prime Minister also said that it is a big day for entire Eastern India in terms of AatmNirbharta of connectivity and availability of clean fuel.

The Prime Minister said the four projects will improve both ease of living and ease of doing business in the region. These projects will also help Haldia to grow into a major hub of export-import.

Families in West Bengal, Odisha, Bihar, Jharkhand, Chhattisgarh, UP & northeast will be benefitted from the LPG import terminal. The sector will provide gas supply to over 2 crore ppl of which,1 crore will be beneficiaries of Ujjwala Yojana. It'll also provide employment:PM Modi

PM Modi further listed the works underway in road, rail, airport, ports and waterways to improve the quality of life and business in the Eastern part of the country. He pointed out how the scarcity of gas was leading to the closure of industry in the region and to remedy the situation, it was decided to connect eastern India with the eastern and western ports and Pradhan Mantri Urja Ganga Pipeline is a part of that project.

Speaking on the 347 km Dobhi-Durgapur Natural Gas Pipeline section, PM Modi said that it will directly benefit not only West Bengal but also 10 districts of Bihar and Jharkhand. The Construction work provided 11 lakh man-days employment to locals. It will also provide clean LPG to the kitchens and enable clean CNG vehicles and provide continuous gas supply to Sindri and Durgapur Fertilizer factories.

The Prime Minister asserted that the Central government is working tirelessly to develop West Bengal as a major trading and industrial centre and port-led development is a good model for the same.

PM Modi also said that the new flyover and proposed Multi-Modal Terminal of Inland Waterways authority will help improve the connectivity and lead to emergence of Haldia as a center of immense energy for Aatma Nirbhar India.

The inaugural event of the four projects was attended by West Bengal Governor Jagdeep Dhankhar and Union Minister Dharmendra Pradhan among others. Prior to it, the Prime Minister had attended a public meeting in Haldia.