The fifth edition of the survey mainly evaluated 23 major Indian cities based on 89 objective parameters developed using the City-Systems framework and compared them with benchmark cities of London, New York and Johannesburg. 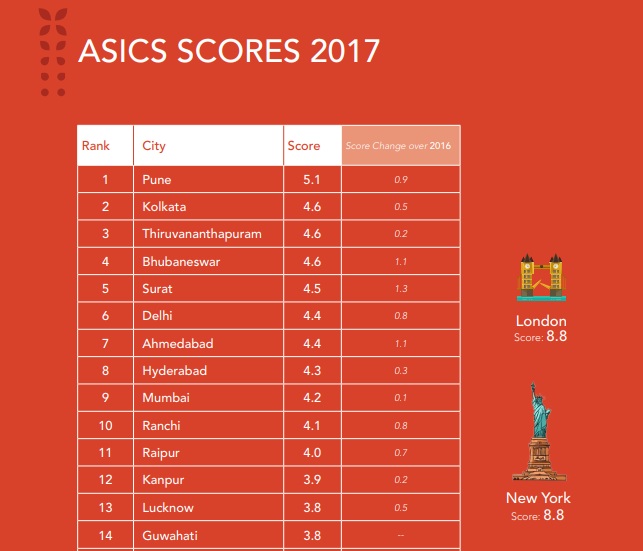 The Annual Survey of India’s City-Systems (ASICS) ranked the city of Pune at the top with a score of 5.1 and Karnataka’s capital city Bengaluru at the bottom with a score of 3.0.

The other cities featuring among the top 5 include Kolkata at 2nd position followed by Thiruvanathapuram at the 3rd position and Bhubaneswar at the 4th position, all having the same score of 4.6.  Surat came 5th with a score of 4.5.

The fifth edition of the survey mainly evaluated 23 major Indian cities based on 89 objective parameters developed using the City-Systems framework and compared them with benchmark cities of London, New York and Johannesburg.

Key Findings of the Report

• Around 55 per cent of the citizens live in cities where the mayor has a term of 2.5 years or less.

• Around 54 per cent cities do not generate enough revenue to meet their salary costs.

• Only 39 per cent is the average percentage of own revenues to total expenditure.

• Only 2 cities have formed both ward committees and area sabhas.

• Only 10 months is the average tenure of a municipal commissioner.

• 35 per cent or a third of municipal staff positions remains vacant.

Following is the scorecard of the selected cities:

• The survey found that the pace of City-Systems reforms in India has been painfully slow.

• The Indian cities scored between 3.0 and 5.1 while London and New York scored 8.8 and Johannesburg, a city from a developing country, scored 7.6.

• The scores of the benchmark cities indicated how far the Indian City-Systems need to be strengthened to deliver good quality of life.

The report identified the following five systemic challenges that need to be addressed urgently to deliver better quality of life to citizens in a sustainable manner:

1. Lack of a modern, contemporary framework of spatial planning of cities and design standards for public utilities.

2. Weak finances, both in terms of financial sustainability and financial accountability of cities.

3. Poor human resource management, in terms of number of staff, skills and competencies of staff, organisation design and performance management.

The Annual Survey of India's City-Systems (ASICS) evaluates urban governance using the City-Systems framework consisting of four distinct but inter-related components that help govern a city and deliver good quality of life to all citizens.

The ASICS score of a city is an indication of the health of its governance systems and therefore its ability to deliver good quality of life in the medium to long term.