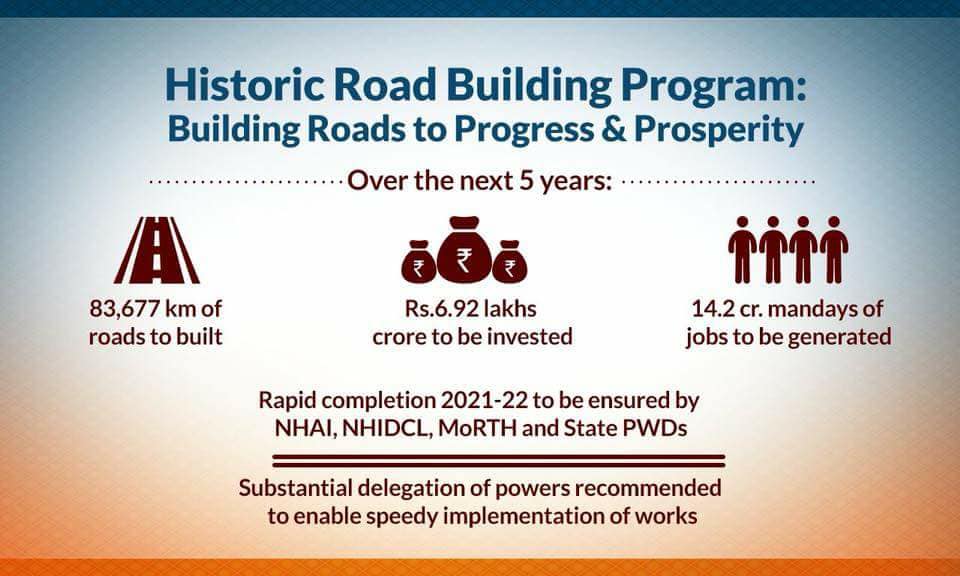 The Union Government on 24 October 2017 approved mega highway projects to build 83677 km of highways over the next five years at a cost of Rs 7 lakh crore.

These highway projects include the ambitious Bharatmala project which is the second-largest highway project after National Highways Development Project (NHDP) that saw development of about 50000 km of roads.

The Bharatmala Pariyojana or Project will subsume all the existing highway projects, including the flagship National Highways Development Project (NHDP).

Highlights of the Highway Projects
• Referred as "Connecting India like never before", Bharatmala project is an umbrella programme for roads under which 34800 km of highways will be constructed at a cost of Rs 5.35 lakh crore.
• Bharatmala Project will include 9000 km of economic corridors, 6000 km of inter-corridor and feeder routes, 5000 km of national corridors efficiency improvement, 2000 km of border road connectivity, 800 km of expressways and 10000 km of balance NHDP projects.
• A study under the Bharatmala project by global consultancy firm AT Kearney identified 44 economic corridors for development. The corridors included Mumbai-Cochin-Kanyakumari, Bengaluru-Mangaluru, Hyderabad-Panaji and Sambalpur-Ranchi among others.
• The government has assigned NHAI, National Highway and Industrial Development Corporation (NHIDCL) and state Public Work Departments (PWDs) for the Bharatmala Project.
• The substantial delegation of powers has been provided to NHAI, NHIDCL and the Ministry of Road Transport and Highways to enable speedy implementation.
• Under the Phase–I of Bharatmala Pariyojana, 9,000 km of Economic Corridors will be developed. The Public Investment Board (PIB) had approved the phase-1 of the project in June 2017.
• In addition to Bharatmala, National Highways Authority of India (NHAI) will, in parallel, implement the balance works of 48877 km roads with an outlay of Rs 1.57 lakh crore.
• The first bundle of 9 NH stretches of 680.64 km has been put out to tender by NHAI with potential monetisation value of Rs 6258 crore.

With an aim to arrange funds for the project, for the first time ever, the government will monetise 82 operating highways under Toll - Operate- Maintain-Transfer (ToT) Model for generating a private investment potential of Rs 34000 crore.

How Bharatmala project will trigger highway development in India?
• The focus of Bharatmala Pariyojana is on allied expressways, border connectivity and international connectivity.
• It will improve the connectivity with backward and sensitive border areas. This will in turn bring urbanization and real estate growth.
• It will also benefit mountainous and remote areas of the country where connectivity and economic activity is poor.
• It is expected to boost the associated industries like cement and steel sectors and will generate lakhs of jobs.
• The Bharatmala project will also benefit the freight and logistics industry. It will facilitate in bringing down the logistics cost and make Modi government’s schemes like ‘Make-in-India’ more attractive to investors.