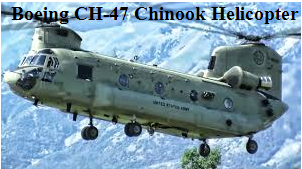 CH 47 Chinook helicopter can deliver heavy payloads to high altitudes and is suited for operations in high Himalayas. Also, the aircraft has been battle-tested in diverse, extreme conditions throughout the world.

The first unit of four heavy-lift Chinook helicopters have been formally inducted in Indian Air Force (IAF). According to Air Chief Marshal BS Dhanoa Chinook has been procured with India specific enhancements and can carry out military operations even at night also. India faces several security challenges but Chinook has a capability to lift vertically even across a diversified terrain which will be a boom to India. Let us study more about Chinook Helicopter through this article.

1. Chinook is a significant force multiplier for the Indian Air Force and can operate in different terrains and conditions. Do you know that it has a capability to airlift the M777 lightweight howitzers that have been inducted last year in the Indian Army's Artillery?

2. The payload capacity of Chinook is about 10 tonne. These helicopters are expected to lift artillery, vehicles, road construction and engineer equipment as well as troops and will supply it to mountainous region in North and North-East region of India.

3. Chinook can deliver heavy payloads to high altitudes and is suited for high Himalayas operations and this will enhance the India's capabilities across a range of military and HADR missions. Therefore, it can be operated at any time and in all weather. Also, they are suitable for operation in tough and dense terrain.

4. The first unit of Chinook is inducted into the IAF on 25 March, 2019 at Chandigarh Air Force station 12 Wing.

6. Do you know the Chinook name came from the Native American Chinook people of modern day Washington State?

7. As Chinook helicopters are multi-mission heavy-lift transport helicopters they will be able to transport troops, artillery, supplies, equipment on the battlefield, ammunition and also barrier materials.

8. Not only they are used for military operations but also for disaster relief, search and recovery operations, medical evacuation, fire-fighting and civil development.

9. Do you know that the Chinook helicopters can carry 11 tonnes and 45 troops of a maximum payload? In an additional, it can also carry under slung load of up to 10 tonnes. It has fully-integrated digital cockpit management system, along with Common Aviation Architecture and advanced cargo-handling capabilities.

10. As discussed above the Chinook is used by more than 19 countries armed forces including the UK, Canada, Japan, South Korea, UAE, Italy, Australia, Spain, Netherlands, Greece, US Army, US Army Reserve and the National Guard.

Do you know about the Chinook Deal?
In 2015-16, 2 deals were signed by India: One for the Chinook heavy-lift helicopter and another for the Apache attack chopper. In September 2015 the Ministry of Defence had finalised the deal with Boeing for production as well as training and support of 15 Chinook helicopters. It is being said that the Apaches will be supplied by the beginning of September 2019 at the Pathankot airbase.

So, induction of four CH-47 Chinook helicopters in the Indian Air Force will be an asset to the airlift capabilities. It will enhance our heli-lift capability across all types of terrain. Therefore, the IAF currently has 15 Chinook helicopters on order. The other CH-47F(I) Chinooks will continue to be delivered as per schedule, said Boeing India in the statement.

Why GSAT-11 India’s heaviest satellite was not launched from India?