But if we talk about the Indian condition in terms of petroleum energy; then I would say that India has miles to go.

Today, India has to import 84% crude oil of its requirement which constitutes 25% of the total Indian import bill. The Petroleum Planning and Analysis Cell (PPAC), the oil ministry’s technical arm, said that the import bill of crude oil is estimated to increase by 42% from $88 billion in 2017-18 to $125 billion in 2018-19, considering the Indian basket crude oil price of $77.88/bbl and $/Rs. exchange rate of 72.22 for the balance part of the year.

In the present scenario, the concern of the Central government is the fluctuation in the price of crude oil in the international market. Therefore, there is a dire need for India to make petroleum reserves to ensure the country's energy security and avoid monetary loss due to price fluctuation.

Let us know in this article that where and why India is making petroleum reserves in the country;

Crude oil is stored in the caves made in the ground. Stone caves are man-made and considered the safest place to deposit hydrocarbons.

When the concept of petroleum reserves started in India?

Due to the first Gulf War in the year 1990, crude oil prices in the international market had been very high, due to which India's Foreign Exchange Reserves have declined and India had foreign currency reserve just ($ 1.2 billion) to pay import bill of only three weeks. Indian government learned a new lesson from this incident.

In order to get a long-term solution to this problem, the Atal Bihari Vajpayee Government had given the idea to construct oil reserves in India in 1998.

The construction and maintenance of the strategic petroleum reserves (SPR) is given to the Indian Strategic Petroleum Reserves Ltd (ISPRL).

In the first phase of storage development, ISRPL has built the underground rock caverns at Visakhapatnam, Mangaluru and at Padur. 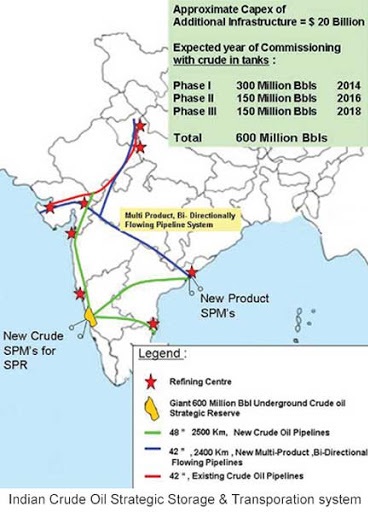 The combined capacity of these three strategic reserves is 5.33 MT. The three projects had storage capacity for 13 days.

In the second phase, the government is planning to create 12.5 MT storage capacity at Padur, Chandikhol (Odisha), Bikaner (Rajasthan) and Rajkot (Gujarat).

India still needs to import 83% crude oil of its requirement which increases the import bill of India which further widens the Current Account Deficit (CAD) of the country.

The fluctuations in the price of crude oil in the international market create an atmosphere of uncertainty in the country. So in this way, the economic condition of the country is dependent on the oil-importing countries i.e. Gulf countries which do not suit to a sovereign country like India.

It is known that there is always a political upheaval in the Gulf countries, which can create some kind of conditions in our country. So to avoid any unprecedented development in the country; the government of India is building  Strategic Petroleum Reserves in the country.

As a summary, it can be said that the construction of strategic petroleum reserves by India is a great way to secure the country's energy security. These reserves would act as a piggy bank for India in the event of a war-like situation in the Gulf countries or other oil importers of India.

What is the significance of the images on the reverse side of Indian Currencies?