CBSE chapter wise notes based on chapter 11, Dual Nature of Radiation and Matter of Class 12 Physics NCERT textbook are available in this article. These notes are important for CBSE class 12 Physics board exam

The complete notes are given below

In 1905, Albert Einstein proposed a radically new picture of electromagnetic radiation (quanta of energy of radiation) to explain photoelectric effect.

Each quantum of radiant energy has energy hν, where h is Planck’s constant and v is the frequency of light.

The value of work function for a particular material is constant and it depends on nature of material.

Intensity of light depends upon the number of photons present in it. It does not depend on the frequency of incident light.

Kinetic energy of photoelectron depends on frequency of incident light as Kmax = h v ‒ ϕ0 or Kmax ∝ v. It does not depend on intensity of radiation.

In photoelectric effect, photoelectrons emitted depend only on the intensity of light. It is independent of the frequency of incident light, provided v > vo.

Photoelectric Current is defined as the rate of emission of photoelectrons from the metal surface. It is directly proportional to the intensity of incident radiation.

Suppose, VS is required stopping potential, e is charge on electron then eVo = ½ m (vmax)2.

From above equation we can easily observe that,

Stopping potential is independent of

• Distance of the source from metal surface

• Illuminating power of the source

A photocell is a technological application of the photoelectric effect. It is a device whose electrical properties are affected by light. It is also sometimes called an electric eye. Photocells are used in the reproduction of sound in motion pictures and in the television camera for scanning and telecasting scenes. They are used in industries for detecting minor flaws or holes in metal sheets.

The wave nature of light shows up in the phenomena of interference, diffraction and polarisation. On the other hand, in photoelectric effect and Compton effect which involve energy and momentum transfer, radiation behaves as if it is made up of a bunch of particles – the photons.

A natural question arises: If radiation has a dual (wave-particle) nature, might not the particles of nature (the electrons, protons, etc.) also exhibit wave-like character?

de Broglie hypothesis attributes a wave like character to matter. If radiation shows dual aspects, so should matter.

De Broglie proposed that the wave length λ associated with a particle of momentum p is given by, λ = h/p = h/(m v), where m is the mass of the particle and v its speed.

The experiment by Davisson’s and Germer’s provides experimental proof of the concept of wave nature of material particles.

The experimental arrangement used by Davisson and Germer is schematically shown in figure given below: 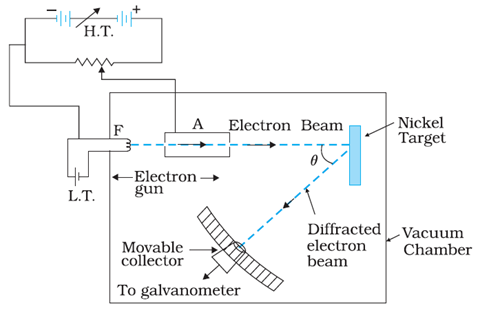 In the experiment, an electron gun was used to produce a beam of electrons. This fine beam of accelerated electrons was made to fall on a nickel crystal and atoms of the crystal scatter these electrons in different directions. The intensity of electrons beam scattered in a given direction was observed by a detector. This detector was made to rotate on a circular scale. From the experiment, scientists observed the intensity of scattered beam of electrons for different values of latitude angles or scattering angles which are the angles between the incident and the scattered electron beams.

The appearance of the peak in a particular direction is due to the constructive interference of electrons scattered from different layers of the regularly spaced atoms of the crystals. From the electron diffraction measurements, the wavelength of matter waves was found to be 0.165 nm.