Time, Speed and Distance (TSD) is an important and popular topic of Quantitative aptitude section in many entrances such as CAT, CMAT, MAT, XAT, IIFT, SNAP etc. Practise Number System questions at jagranjosh.com to test your aptitude.

1. While walking along the road side of Connaught Place. Raman notice that every 20 minute there is a DTC bus coming in the opposite direction and every 30 minute there is a DTC bus overtaking him from behind. What is the time gap between one of DTC bus passing a stationary point known as Local Bus Stop beside the route and the immediately next bus in the same direction passing the same stationary point?

2. A and B start from Shimla and Manali respectively with uniform velocities. A is headed towards Manali and B towards Shimla and both cities are 720 km apart. A rests whenever B is on the move and B rest whenever A is on the move. A’s speed is 30 km/h and B’s speed is 36 km/h. If A starts first and reaches Manali in 36 hours, then find the least time that B would take to reach his destination after A makes a start:

3. Radhika and Sumit start from Gurgaon and Faridabad towards Faridabad and Gurgaon respectively, at the same time. After they meet at Kundli on the way from Gurgaon to Faridabad, Radhika reduces her speed by 33.33% and returns back to Gurgaon and Sumit increases his speed by 33.33% and returns back to Faridabad. If Radhika takes 2 hours for the entire journey, what is the time taken by sumit for the entire journey?

4. Vimal and Kamal went for a mountain walk of 24km. Vimal is faster than Kamal. The sum of their individual speeds is 10 km/hr and sum of time taken by them is 10 hr. Find how much faster is Vimal from Kamal.

5. The Shatabadi Express without its rake can go 48km an hour, and the speed is diminished by a quantity that varies as the square root of the number of wagons attached. If it is known that with four wagons its speed is 40km/h, the greatest number of wagons with which the engine can just move is

6. A bee flew from point X, the starting point of a subterranean passage and a train is entering from Y, the other end of passage. At moment when train starts from Y towards X, fly starts moving towards the engine, and then comes back to the end X. It repeats until train until train engine reaches point X of the passage. Find the total distance covered by the bee if the speed of the bee is 40 km/hour, the speed of the train is 80 Km/hour and the passage length is 20 km?

7. Without stoppage, a train travels a distance of 120 km in 2 hours and with stoppage it covers the same distance with an average speed of 40Km/hr. On an average, how many minutes per hour does the train stop during the journey?

9. Two cars started simultaneously from a same point, one in the west direction and other in north. Two hours later, the distance between them turned out to be 100 Km. Find the speed of the faster car knowing that the speed of one of them was 75% of the speed of the other.

(Where V is the velocity of the buses)

Let the speed of walking be W, then 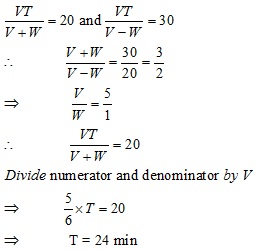 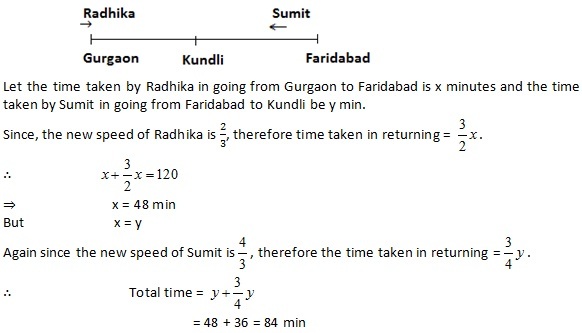 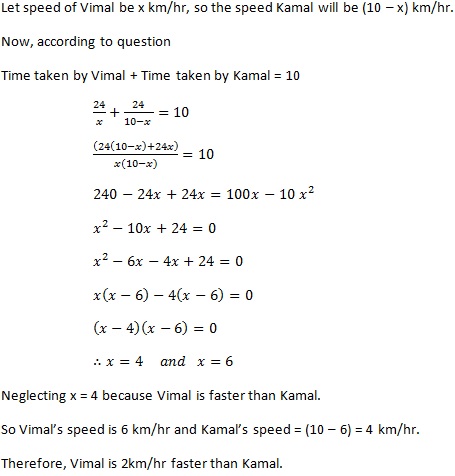 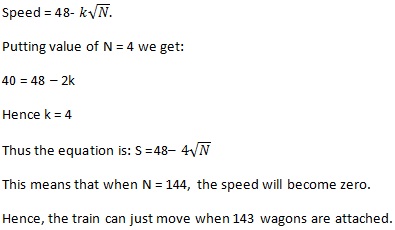 Without stoppage, average speed of the train = 60 km/hr means it speed per minute = 1 km.

With stoppage it covers the same distance with an average speed of 40Km/hr means it travel only for 40 minutes. 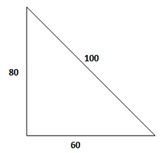 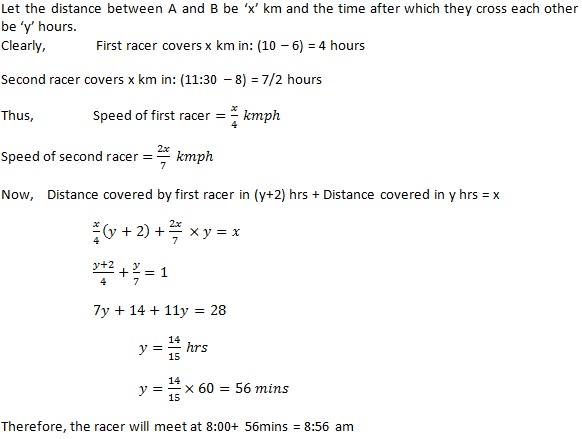