Scheduled bank refers to a bank which is listed in the 2nd schedule of the Reserve Bank of India Act, 1934. Read on to know more about schedule banking structure in India.

Scheduled bank, is usually private, nationalized and foreign banks, refers to a bank which is listed in the 2nd schedule of the Reserve Bank of India Act, 1934. Scheduled banks are authorized to carry out the normal business of banking such as accepting deposits, giving out loans and other banking services. A scheduled bank is eligible for seeking loans at bank rate from RBI. They are also entitled to membership to clearing houses.

A. Nationalized Banks
B. State Bank of India and its associate
C. Other Indian Public sector Banks 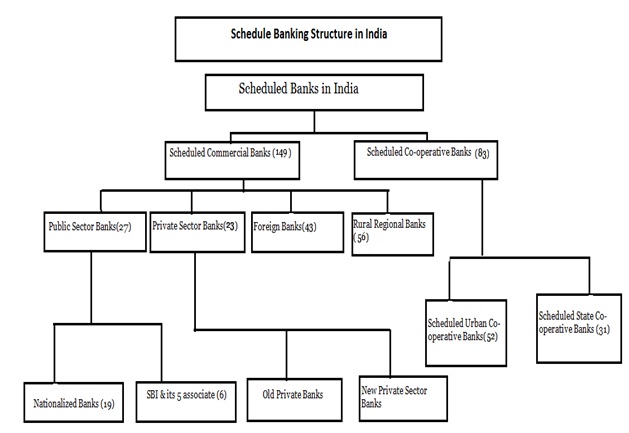 A. Public Sector Banks: -  Currently, there are 27 Public Sector Banks in India that includes SBI(& its 5 other associate banks) and 19 Nationalized Banks. Apart from that, another two banks are IDBI and Bhartiya Mahila Bank, which come under this category.

i. SBI and its associates: - State Bank of India is the Biggest & oldest banking & a Financial company in India by assets. The Current Five associate banks are: -

B.  Foreign  Banks: - There are 43 foreign banks operating in India at present as per the RBI statistics. Most of them are niche players.In this context, RBI policy based upon two principles.

D. Rural Regional Bank: - RRB are Government owned Banks, but are not commercial Banks. At Present, There are 56 RRBs in total listed under RBI.  Each RRB is owned by three entities with their respective shares as follows: -

They are regulated by NABARD.