In the following article, we will discuss about the coding-decoding concept including various tips & tricks to resolve various kinds of inquired problems. 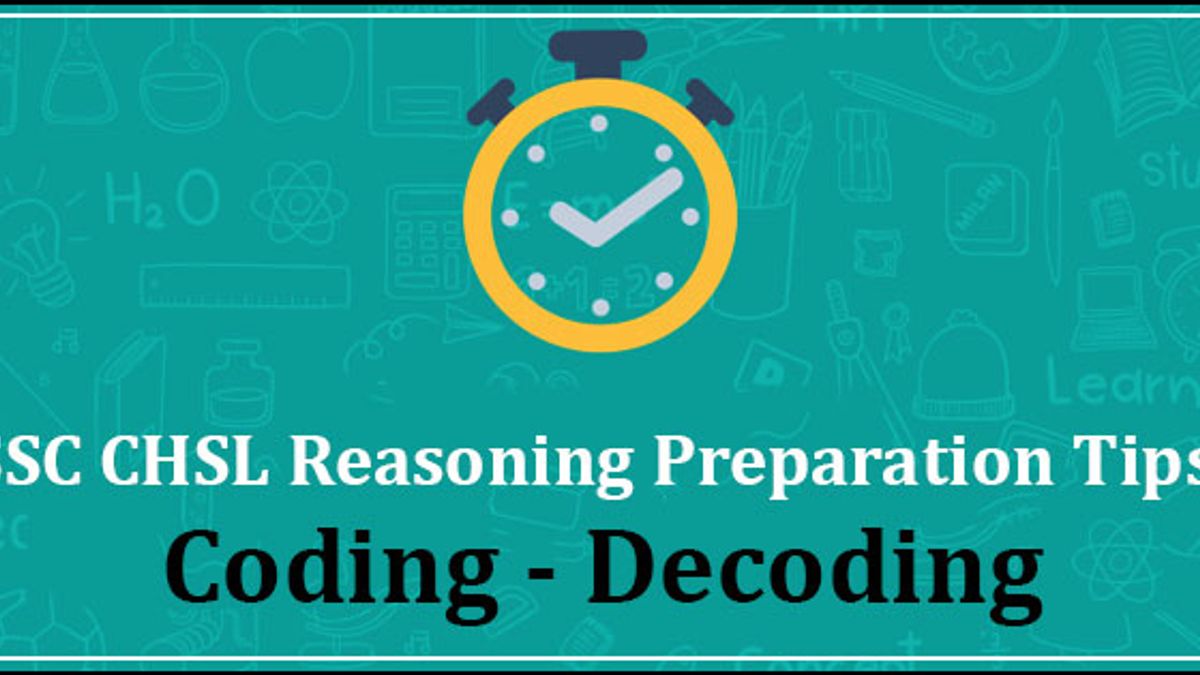 As it is known to all that SSC measures one’s ability on the basis of performance in Quantitative Aptitude, General Intelligence & Reasoning, General English and General knowledge. All of them carry equal weight & same regulations in terms of maximum marks and in negative marks in all phases of SSC CHSL exam. However, some sections are quite easy while others are cumbersome and time-consuming. In the same fashion, reasoning section is a blend of such questions, which ranges from the easier ones to the toughest ones. Reasoning section is all about testing one’s ability of questioning and thinking logically.

Coding-Decoding is a topic that falls under the reasoning ability section. You can try it brilliantly or spare a plenty of time having no appropriate responses. To overcome this problem & for gaining high scores, candidates have to practice harder.

In the following article, we will discuss about the coding-decoding concept including various tips & tricks to resolve various kinds of inquired problems.

Coding-decoding is a method of transmitting data/information in encrypted form between the sender and the receiver without anybody’s consent. Prior to transmission, the data is encoded first and sent through a medium and at the receiving end, it is decoded accordingly in order to procure the original data. Hence, data/information is prevented from distortion and leakage.

Beyond this, coding-decoding carries a significant weightage in various competitive exams including SSC CHSL. The concept and approach for exams remains the same except the difficulty level of questions varies in Tier-1 & 2 exams. Out of this topic, candidate will find one question minimally in SSC CHSL Tier-1 exam. Coding-Decoding includes four types of questions out of which questions may be framed in reasoning section of SSC CHSL exam.

Now, Let us discuss about the methods to solve such questions-

Under this category, the alphabets in the given word are replaced by other random alphabets following a specific rule.

E.g. In a certain code, TEACHING is to UFBDIJOH. How BOOKS will be encoded in this code?

The answer is: Each alphabet in the word is incremented by 1 in the standard sequence. Hence, the answer will be CPPLT.

Under this category, names/words/strings are substituted with different words/names/strings. Therefore, we have to trace the substitution carefully to arrive at the appropriate answer. Let us understand with an example-

The Answer is ink because soap is known as ink. Hence, ink is the right answer.

In this type of coding and decoding, Three-four statements are stated in a coded language under a problem and the code for a specific word is asked. For handling such questions, pick a random number of two or more phrases, which will have some similarity and dissimilarity. The similarity will be equal to each other. Hence, you can find out the code for each relevant string.

Let us figure out the code and letter for each string-

Similarly, comparing the remaining statements, we will get: token== bad; name== are;

Hence, the correct answer will be ‘time’ for ‘they’ string.

In this type of encryption, the numbers are given in the format of letters or phrases or strings. By following the same rule mentioned above, you can figure out the correct answer. Let us understand this with an example-

Which symbol stands for 'leaves' in that code?

In the above question, $ is common in first two statements. Hence, $ will correspond to ‘green’. Hence, we can deduce the relationship between other statements.

Hence, the correct answer is ‘&’ from the very first statement.

For more tips and tricks related to SSC exam preparation, you can visit us at www.jagranjosh.com .