Air Marshal RKS Bhadauria has taken over as the 26th IAF Chief after superannuation of Air Chief Marshal BS Dhanoa. 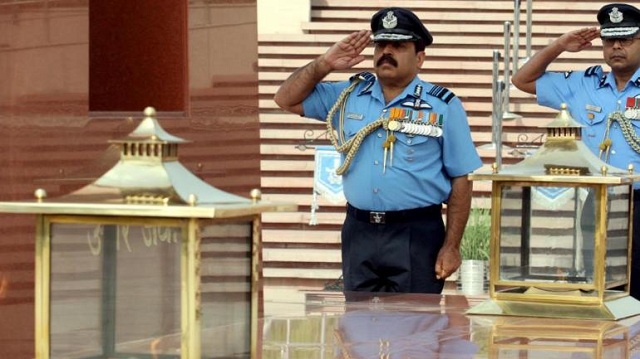 Air Marshal Rakesh Kumar Singh Bhadauria has taken over as the 26th Chief of the Indian Air Force (IAF), succeeding Air Chief Marshal BS Dhanoa, who demitted office after his superannuation on September 30, 2019.

RKS Bhadauria was appointed as the next chief of IAF by the Union Government on September 19, 2019. The Air Marshal was earlier heading IAF's Bengaluru-based Training Command.

• RKS Bhadauria was earlier serving as the Vice Chief of Air Staff. He played a key role in procuring the 36 multirole Rafale fighter jets for India as the Chairman of the Indian team that negotiated the deal with France.

• The Air Marshal was commissioned into the fighter stream of the Air Force on June 15, 1980, with the 'Sword of Honour.'

• He has several important positions in the IAF such as Commandant at National Defence Academy, Senior Air Staff Officer at the Central Air Command and Vice Chief of Air Staff from January 2016 to February 28, 2017.

• From March 1, 2017, RKS Bhadauria served as the Air Officer Commanding-in-Chief (AOC-in-C) at the Southern Air Command.

• He was then appointed as the Chief of IAF's Bengaluru-based Training Command on August 1, 2018.

Wing Commander Abhinandan received his flying category in less than 6 months. He had begun flying MiG-21 just about two weeks before the sortie with the IAF Chief. Prior that, he had been grounded for six months due to ejection from his MiG-21 Bison jet after he was shot down during aerial combat with a Pakistani fighter jet, a day after India’s Balakot airstrike.

On the day of his superannuation, the IAF Chief visited the National War Memorial in New Delhi to pay tributes to the defence personnel who had laid their lives in service of the nation.