“I also ejected in 1988, it took me 9 months to get my category back. He has been back in less than 6 months,” said IAF chief BS Dhanoa.

The Air Chief Marshal sat in the front seat and Wing Commander Abhinandan sat in the rear. It was the last sortie flown by the IAF Chief BS Dhanoa in a fighter aircraft before his retirement on September 30.  He said that it was a pleasure for him to fly with Abhinandan as he has got his flying category back and that is what all pilots look forward to. “I also ejected in 1988, it took me 9 months to get my category back. He has been back in less than 6 months,” Dhanoa said. 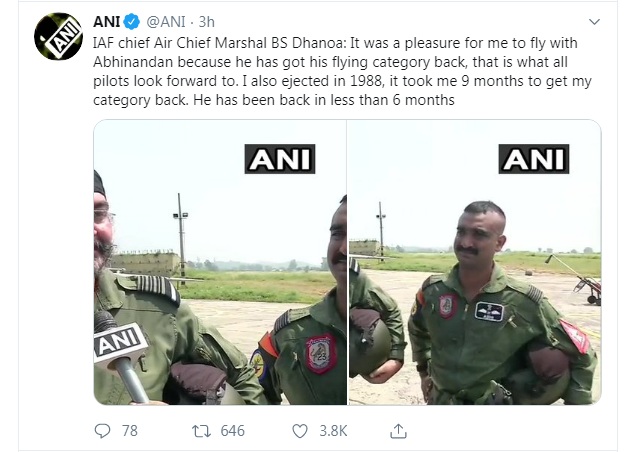 The IAF chief further said that he and Abhinandan had two things in common, “First, both of us ejected and second, both of us have fought Pakistanis.” While IAF Chief BS Dhanoa had fought in the Kargil war, Abhinandan fought after Balakot. The IAF chief also pointed out that he had also flown with Abhinandan's father who retired as an Air Marshal around five years ago. "I have flown with his father. It's an honour for me to do my last sortie in IAF, in a fighter aircraft, with his son,” Dhanoa said. 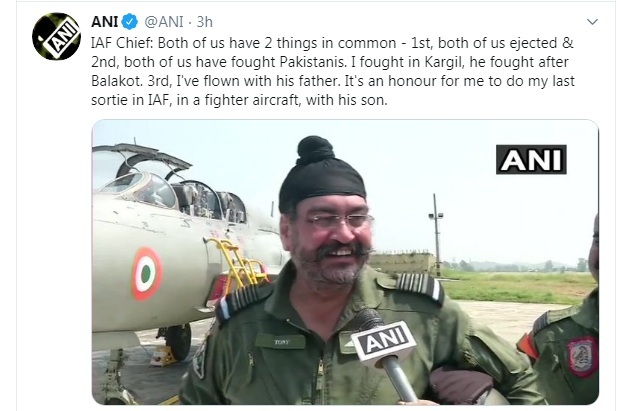 Wing Commander Abhinandan Varthaman had started flying the MiG-21 just about two weeks ago. He had been grounded for six months due to ejection from his MiG-21 Bison jet, after it was shot down during aerial combat with Pakistani fighter jets on February 27, a day after the Balakot airstrike by India.

Abhinandan fell in the Pakistani territory and was captured by the Pakistani Army, leading to a diplomatic tussle with India applying pressure on Pakistan to release the prisoner of war. Pakistan also faced immense international pressure to release Abhinandan. Wing Commander Abhinandan was finally released by Pakistan on March 1, 2019 from the India-Pakistan border at Wagah.

In the recent conferral of Gallantry awards, Wing Commander Abhinandan was conferred with the Vir Chakra, the Indian gallantry award presented for acts of bravery on the battlefield. The award is the third-highest gallantry award after the Paramvir Chakra and the Mahavir Chakra.