Karunanidhi was known as a strong Indian politician who dominated Tamil Nadu's politics for six decades along with arch-rivals MG Ramachandran and Late J Jayalalithaa. Karunanidhi served as the Chief Minister of Tamil Nadu for five separate terms during the 1969–2011 period.

DMK patriarch Muthuvel Karunanidhi, the former Chief Minister of Tamil Nadu, passed away on August 7, 2018 after battling a brief illness at the Kauvery hospital in Chennai, Tamil Nadu. He was 94. 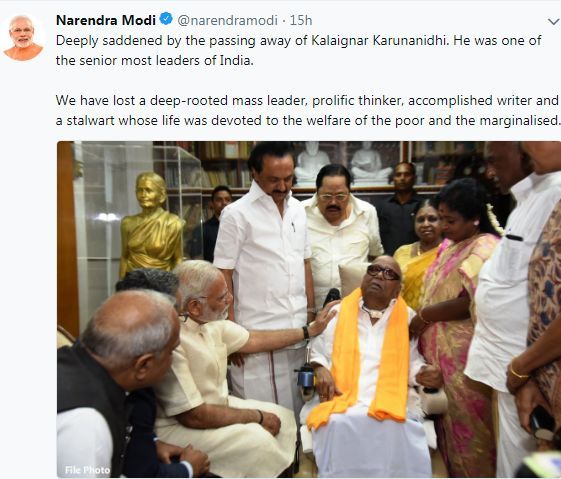 He was admitted to the hospital on July 28, 2018 after he contracted Urinary Tract Infection and later, developed a high fever.

To mourn the death of such a strong leader, the Tamil Nadu government announced a public holiday on August 8, 2018. The state will also observe a seven-day mourning as a mark of respect for the former chief minister.

• Karunanidhi had quit his flourishing career as an artist and writer to devote himself to politics and the Dravidian movement that was then led by Periyar E. V. Ramasamy, which he joined soon after it started in 1949.

• Popularly called 'Kalaignar', he was known for his film scripts that greatly helped him in his political career. His powers of oratory bestowed on him a cult status much similar to Jayalalithaa.

• In 1969, Mr Karunanidhi was appointed as the Chief Minister of Tamil Nadu after the death of Dravida Munnetra Kazhagam (DMK) ideologue CN Annadurai.

• In 1972, his clash with MG Ramachandran (MGR) led to the ousting of the latter from the party, thus leading to the formation of l rival party All India Anna Dravida Munnetra Kazhagamor AIADMK.

• In 1977, the AIADMK came to power and MGR ensured that DMK stayed out of power as long as he was alive.

• However, later in 1989, Karunanidhi's DMK regained power after MGR's death.

• This victory did not stay for long. As the aftermath of Rajiv Gandhi's assassination in 1991, Karunanidhi was shunted out of the power following the rumours of his links with the Sri Lankan outfit LTTE, which was considered as responsible for the bomb attack on the former Prime Minister Rajiv Gandhi.

• He returned to power in 1996 following the defeat of Jayalalithaa. Since then, the parties of Karunandhi and Jayalalithaa have been voted in alternately, a tradition broke in 2016, when Jayalalithaa was elected for a second straight term.

• The alliance contested the 1999 general elections together and emerged victorious. Resultantly, Karunanidhi grabbed portfolios like Ministry of Petroleum, Road, Transport and Commerce for his party.

• Later in 2003, he withdrew support from the BJP and contested the 2004 and 2009 general elections along with Congress in Tamil Nadu. The alliance managed to secure a victory both the times.

• In 2013, Karunanidhi withdrew support from the Congress citing the latter’s insensitivity towards Sri Lankan Tamils.

Karunanidhi’s politial career was marked by the multiple allegations of corruption against him and his party members. After the promulgation of the Emergency in 1976, the DMK government was dissolved on charges of corruption.

In 2001, the Sakaria commission indicted Karunanidhi for corruption in allotting tenders for the Veeranam project. In 2010, his party also faced allegations regarding the 2G spectrum case when his party was sharing power with the UPA at the centre.

• Born in 1924 in Tirukkuvalai in the then composite Thanjavur district, Karunanidhi belonged to a family of musicians. His father Muthuvelar was a nagaswaram player.

• Karunanidhi was also sent to learn the instrument, But, soon he turned his back on music as nagaswaram players in those days were not allowed to wear shirt or wear the angavastram.

• He was a rebel since his childhood days. He once threatened to jump into Kamalayam, the temple tank of Thiyagarajaswami in Tiruvarur, when his headmaster refused his admission.

• At the age of 14 years itself his acts displayed the political zeal when he convinced a group of students against imposition of Hindi in 1938.

• Before testing his hands in politics, Karunanidhi made his name into script writing. After failing in Class X exams, he moved to Coimbatore to make a living writing scripts for professional theatre groups.

• His style of oratory impressed Periyar E. V. Ramasamy who appointed him as the editor of the magazine of Dravidar Kazhagam, the party founded by Periyar himself.

• As a writer, he worked for 77 films, he penned the dialogues for films that converted three actors of Tamil cinema into heroes. These actors were MGR, Sivaji Ganesan and S.S.Rajendran.

• He wrote commentary for Tholkappiyam, the ancient Tamil grammar and many Sangam literary works.