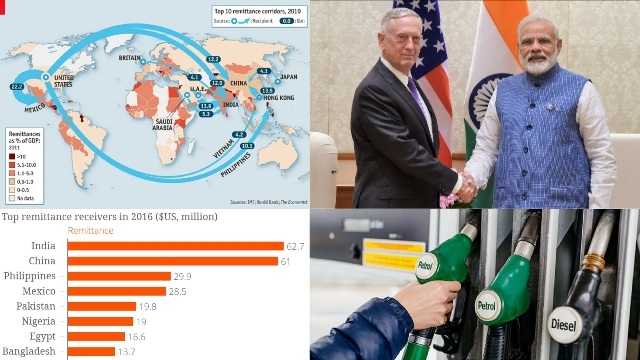 The Union government has decided to reduce the central excise duty on Petrol and Diesel by Rs 2 per Litre effective from 4 October 2017.

With this reduction, the decrease in prices of Petrol and Diesel will be Rs 2.50 per litre and Rs 2.25 per litre respectively in Delhi. This measure is not only aimed at reducing the prices of the fuels but also in giving relief to the consumers.

Since the past few weeks, prices of both the fuels were rising due to increase in their prices in the international market.

US supports India's opposition to CPEC, says it passes through disputed territory

The Trump administration on 4 October 2017 announced its support to India’s opposition to the China- Pakistan Economic Corridor (CPEC).

Speaking during a Senate hearing on South Asia, US Defence Secretary Jim Mattis said that in a globalised world, there are many belts and many roads and no one nation should put itself into a position of dictating 'one belt, one road. Further referring to India's position on CPEC, Mattis said that the corridor also goes through disputed territory.

India to top global remittances chart with $65 billion in 2017

India is expected to retain its position as the top remittances receiving country, with its Diaspora set to bring in money worth almost 65 billion US Dollars in the year 2017.

Ahead of the annual meeting of the International Monetary Fund and the World Bank, a report issued by the global lender said that remittances, which include flows to high-income countries, are projected to grow by 3.9 per cent to 596 billion dollar.