Tensions are expected to escalate between Japan and North Korea after the latter fired a ballistic missile over Japan’s northern Hokkaido Island into the sea. 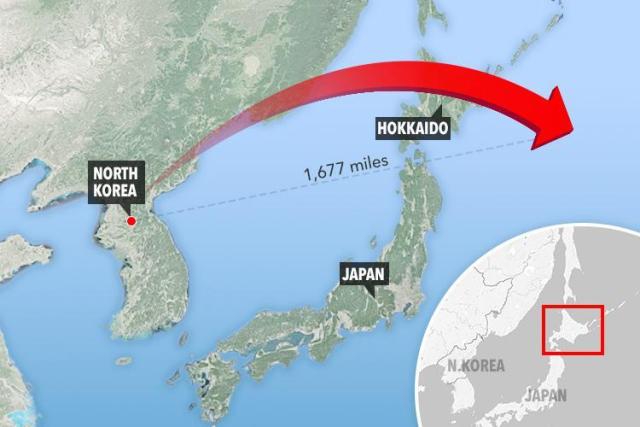 Tensions are expected to escalate between Japan and North Korea after the latter fired a ballistic missile over Japan’s northern Hokkaido Island into the sea early morning on 29 August 2017.

The move provoked a sharp reaction from Japanese Prime Minister Shinzo Abe and other prominent leaders and a warning was meted out to the residents in the particular region to take cover.

The test has been one of the most provocative ever from the isolated state. It appeared to have been of a recently developed intermediate-range Hwasong-12 missile.

According to South Korea's Joint Chiefs of Staff, the missile was launched from Sunan, near Pyongyang and from there it travelled east and over Japan. The missile is reported to have travelled around 2700 km at a maximum altitude of around 550 km.

The development occurred as the US and South Korean forces conducted a joint annual military drill on the peninsula, a move highly objected by North Korea.

North Korea has conducted a series of missile tests since the start of 2017, going against UN sanctions.

Earlier this month, North Korea threatened to fire four Hwasong-12 missiles into the sea near the US Pacific territory of Guam after US President Donald Trump warned the nuclear-armed state that it would face ‘fire and fury’ if it threatened the United States.

To counter North Korea’s threat, the US has announced that it would be installing radar systems in Palau, an independent nation south-west of Guam.

While North Korea has conducted several ballistic missile tests under its leader Kim Jong Un, none have been fired over mainland Japan prior to this. Japanese Prime Minister Shinzo Abe described the action as reckless, unprecedented and a grave threat to Japan.

The matter of concern is that not only are the tests increasing in number with each passing month, but the range of the tested missiles are also expanding, especially with its second test ICBM test, which seemed to be capable of targeting US mainland.

The United Nations Security Council (UNSC) would be convening late on 29 August to discuss the launch. Earlier this month, the 15-member Security Council had unanimously imposed new sanctions on North Korea in response to two long-range missile launches that had taken place in July.