As per a study published in journal Nature on 9 November 2017, India is overtaking China as the World’s largest emitter of Anthropogenic Sulphur Dioxide (SO2).The study, led by researchers at University of Maryland in the US, reveals that India's emissions of the air pollutant sulphur dioxide has increased by 50 per cent since 2007, while China's fell by 75 per cent. 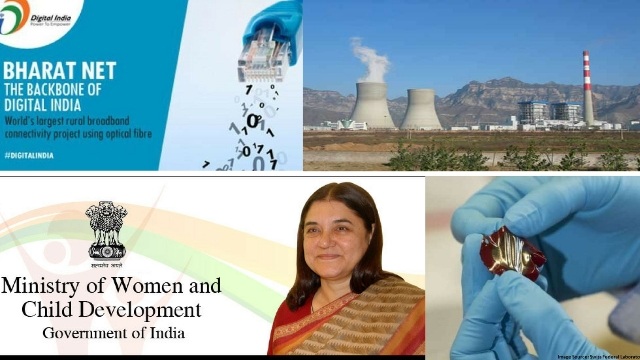 As per a study published in journal Nature on 9 November 2017, India is overtaking China as the World’s largest emitter of Anthropogenic Sulphur Dioxide (SO2).

The study, led by researchers at University of Maryland in the US, reveals that India's emissions of the air pollutant sulphur dioxide has increased by 50 per cent since 2007, while China's fell by 75 per cent.

The index has been developed by the Rajiv Gandhi National Institute of Youth Development (RGNIYD) in Tamil Nadu. The main aim behind constructing the index is to track the trends in Youth Development across the states.

It will help recognise the high and low performing states, indentify the weak domains and inform the policy makers about the priority areas of intervention for youth development in the states.

Researchers have developed a thin, flexible material that generates electricity when stretched or compressed.

The specially designed rubber could be used to construct pressure sensors, for example If the material is compressed, an electrical impulse is produced that can be received and understood by devices.

It can also be used to develop a novel type of control buttons and in clothing to either monitor the wearer's activities or generate electricity from their movements.

The Union Government would be launching its second and final phase of BharatNet project on 13 November 2017 to provide high-speed broadband service in all Gram Panchayats by March 2019. It will be implemented at an outlay of around Rs 34000 crores.

Under phase 2, the government aims to provide broadband connectivity in the remaining 1.5 lakh Gram Panchayats through 1 million km of additional optical fibre. For the same, the government would be providing bandwidth to telecom companies such as Bharti Airtel, Vodafone India, Idea Cellular and Reliance Jio at 75 per cent lower rate to set up broadband and Wi-Fi services in the rural areas.

The Ministry of Women and Child Development would be celebrating the Child Rights Week by hosting ‘Hausala 2017’ festival from 16-20 November 2017.

The festival will be hosted by the Ministry as an Inter CCI Festival for the children who reside in Child Care Institutions (CCIs). The week-long festival will provide an occasion to showcase the talents of children from various child care institutions across the country and provide them with a space to express their dreams and aspirations.