From trending #HappyBirthdayDhoni to sharing posts on social media, M.S. Dhoni fans and the cricket fraternity are doing it all to wish legendary cricketer on his birthday.

b. Padma Shri in India's fourth-highest civilian award in 2009.

e. Padma Bhushan, India's third-highest civilian award in the Republic of India in 2018.

M.S.Dhoni became the captain of the Indian Team for the inaugural ICC World Twenty20 held in South Africa in September 2007 and served as captain till 2016. In test matches, Dhoni captained Indian Team from 2008 to 2014. 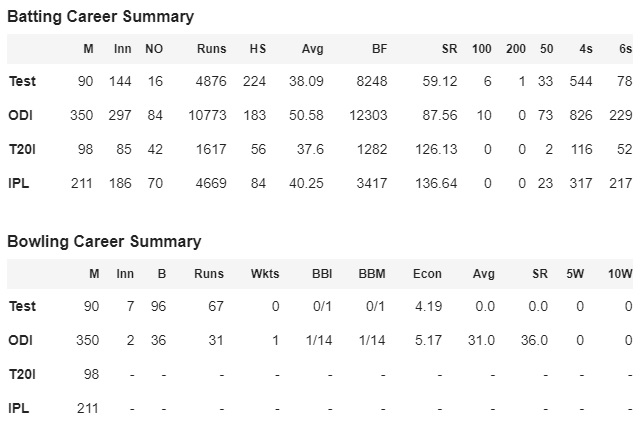 MS Dhoni is the 4th Indian cricketer who scored 10000 runs in the ODIs after Sachin Tendulkar, Sourav Ganguly, and Rahul Dravid. Dhoni played 273 innings to complete his 10,000 runs.

1. Dhoni is the third captain (and the first non-Australian) overall to win 100 games.

3. First Indian and fifth overall to hit 200 sixes in ODIs.

5. Dhoni holds the records of the most dismissals in an innings (6) and career (432) by an Indian wicket-keeper.

6. Dhoni has the most stumpings (123) by any wicket-keeper in an ODI career.

9. He is the only player to score more than one hundred in ODI cricket when batting at number 7 position or lower (Dhoni has 2 centuries at number 7).

The highest score of MS Dhoni in the test match was 224 which was made against Australia in Chennai.

1. Under M.S. Dhoni's captaincy, the Indian team topped the Test cricket rankings for the first time in 2009.

4. M.S.Dhoni's 224 against Australia in Chennai is the third-highest score by an Indian captain.

5. M.S.Dhoni, with 294 dismissals in his career, ranks first in the all-time dismissals list by Indian wicket-keepers.

6. Dhoni's maiden century against Pakistan in Faisalabad (148) is the fastest century scored by an Indian wicket-keeper, and fourth overall.

7. Dhoni shares the record for most dismissals in an innings (6, with Syed Kirmani) and in a match (9) by an Indian wicket-keeper.

T20I Records of the Dhoni

List of Captains of One Day Cricket Team of India