Preamble of the Indian Constitution: Meaning of Keywords 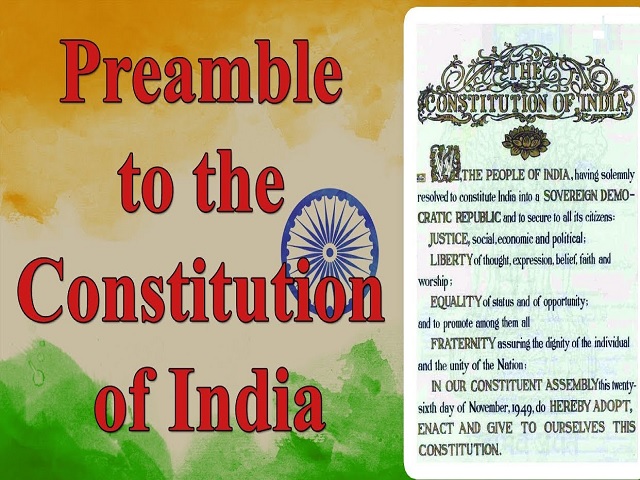 These are the opening words of the preamble of the Indian Constitution:- We are explaining the words used in the Preamble of the constitution one by one. Key words are:-

This word implies that India is neither a dependence nor a dominion of any other nation but an independent state. There is no authority above it, and it is free to conduct its own affairs (both internal and external). Being a sovereign state, India can either acquire a foreign territory or cede a part of its territory in favour of a foreign state.

Even before the term was added by the 42nd Amendment in 1976, the Constitution had a socialist content in the form of certain Directive Principles of State Policy.

What is the difference between Ordinary Bill and Money Bill?

The term 'secular' too was added by the 42nd Constitutional Amendment Act of 1976. However, as the Supreme Court said in 1974, although words 'secular state' is not mentioned in the Constitution, there can be no doubt that Constitution-makers wanted to establish such a state and accordingly Articles 25 to 28 (guaranteeing the fundamental rights to freedom of religion) have been included in the constitution.

The Indian Constitution embodies the positive concept of secularism i.e., all religions in our country (irrespective of their strength) have the same status and support from the state.

A democratic polity, as stipulated in the Preamble, is based on the doctrine of popular sovereignty, that is, possession of supreme power by the people.

The Indian Constitution provides for representative parliamentary democracy under which the executive is responsible to the legislature for all its policies and actions. Universal adult franchise, periodic elections, rule of law, independence of judiciary, and absence of discrimination on certain grounds are the manifestations of the democratic character of the Indian polity.

The term 'democratic' is used in the Preamble in the broader sense embracing not only political democracy but also social and economic democracy.

Constitution of India: features taken from other countries

A democratic polity can be classified into two categories—monarchy and republic. In a monarchy, the head of the state (usually king or queen) enjoys a hereditary position, that is, he comes into office through succession, eg, Britain. In a republic, on the other hand, the head of the state is always elected directly or indirectly for a fixed period, eg, USA.

Therefore, the term 'republic' in our Preamble indicates that India has an elected head called the president. He is elected indirectly for a fixed period of five years.

The term 'justice' in the Preamble embraces three distinct forms—social, economic and political, secured through various provisions of Fundamental Rights and Directive Principles. Social justice denotes the equal treatment of all citizens without any social distinction based on caste, colour, race, religion, sex and so on. It means absence of privileges being extended to any particular section of the society, and improvement in the conditions of backward classes (SCs, STs and OBCs) and women.

The term 'liberty' means the absence of restraints on the activities of individuals, and at the same time, providing opportunities for the development of individual personalities.

The Preamble secures to all citizens of India liberty of thought, expression, belief, faith and worship, through their Fundamental Rights, enforceable in court of law, in case of violation.

Liberty as elaborated in the Preamble is very essential for the successful functioning of the Indian democratic system. However, liberty does not mean `license' to do what one likes, and has to be enjoyed within the limitations mentioned in the Constitution itself. In brief, the liberty conceived by the Preamble or fundamental rights is not absolute but qualified.

The term 'equality' means the absence of special privileges to any section of the society, and the pro-vision of adequate opportunities for all individuals without any discrimination.

The Preamble secures to all citizens of India equality of status and opportunity. This provision embraces three dimensions of equality—civic, political and economic.

Fraternity means a sense of brotherhood. The constitution promotes this felling of fraternity by the system of single citizenship. Also, the Fundamental Duties (Articles 51-A) say that is shall be the duty of every citizen of India to promote harmony and the spirit of common brotherhood amongst all the people of India transcending religious, linguistic, regional or sectional diversities.

The Preamble declares that fraternity has to assure two things the dignity of the individual and the unity and integrity of the nation. The word ‘integrity’ has been added to the preamble by the 42nd Constitutional Amendment (1976).

Significance of the preamble:

The preamble embodies the basic philosophy and fundamental values: political, moral and religious- on which the constitution is based. It contains the grand and noble vision of the constituent assembly, and reflects the dreams and aspirations of the founding fathers of the constitution.

The Acts passed before constitution