General awareness for MBA aspirants is a very important aspect. As a potential candidate who aims to pursue MBA, it is crucial that your GA quotient must be high. This section is aimed at enhancing your knowledge about the important news and happenings that took place in the world in this week (9th to 16th March). It will help you in your preparation for the competitive exams in which you wish to excel.

General awareness for MBA aspirants is a very important aspect. As a potential candidate who aims to pursue MBA, it is crucial that your GA quotient must be high. This section is aimed at enhancing your knowledge about the important news and happenings that took place in the world in this week (9th to 16th March). It will help you in your preparation for the competitive exams in which you wish to excel.

1.  Prime Minister Narendra Modi has inaugurated three major railway projects in Bihar. The estimate cost of these projects is approximately Rs 7000 crore. The total cost of these three bridges is about Rs 7200 crore and these bridges will provide connectivity to north and south Bihar. This project will also help in developing Northern Bihar. There are three bridges over the entire 460 km length of the river Ganga in Bihar:

The inadequate number of bridges is one of the reasons that is hindering the development of Bihar.

2. The Cabinet has given approval to signing of an MoU with International Monetary Fund (IMF) to set up South Asia Regional Training and Technical Assistance Center (SARTTAC) in the country by the global body. The SARTTAC will be a collaborative venture among: 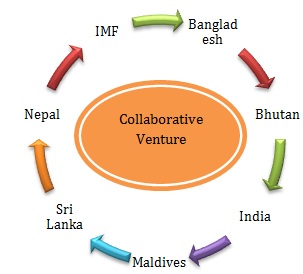 The MoU will help in capacity building of government officials, inclusive of state level in macro, fiscal, monetary policies by the IMF and would enhance greater coordination between the six member countries of South Asia.

3. Myanmar Railways will be supported by RITES (Public Sector Enterprise under Ministry of Railways) as RITES has signed a contract to supply 18 Meter Gauge 1350 HP Diesel Electric Locomotives to them. This supply will help Myanmar in meeting the increasing demand of passenger and freight traffic. This contract was signed at Naypyitaw. These locomotives will be manufactured by Diesel Locomotive Works, Varanasi. 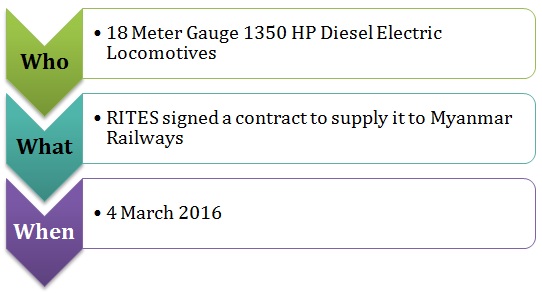 1. ICICI Bank, India's biggest private sector lender by assets, has signed an MoU with the National Housing Bank to launch a subsidy scheme for home loans under the 'Pradhan Mantri Awas Yojana' that aims to help the weaker sections of society in building their own homes.

As per the scheme, loan applicants can construct a brick-and-mortar house by paying significantly lower EMIs, compared to the prevailing market average. Eligible borrowers can avail loans on a subsidy at 6.5% per annum on a maximum amount of Rs 6 lakh or the loan amount, whichever is lower, for a maximum tenure of 15 years.

Future group is aiming to devise big plans in food and consumer business to clock a revenue of Rs 20,000-crore by the year 2021.

3.  A six-year-old girl, Suryassangyini Chaudhary from Baraut in Baghpat district has made a record by hoisting the Tricolour at the 16,300-foot high Kanchenchunga base camp. The girl accomplished this miracle on March 7. According to a certificate issued by the gram panchayat of 07-Yuksam Dubdi village in west Sikkim, she is the youngest person to have trekked this high. In the last five years, her family has ventured on many expeditions, including one to the 14,000-foot-high Himani Chamunda in Dharmshala. 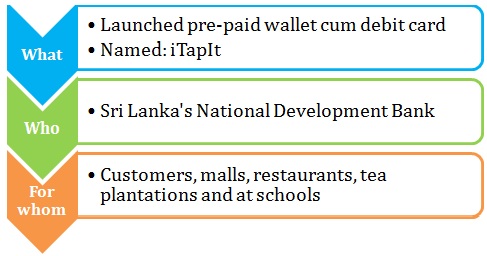 iTapIt, has been launched through the collaboration of NDB Bank and YEP Colombo, a unit of Indian IT firm Yeldi Softcom Pvt Ltd. The card comes with both a magnetic strip and near-field communication (NFC) chip - that makes it useable at both conventional swipe machines, ATMs and next-gen Tap & Pay NFC terminals.

2. The State Bank of India is among four new foreign banks that have been given preliminary approval to open 100 per cent-owned branches in Myanmar. This move will attract the Southeast Asian nation to make investment in the country that has been long ruled by the military and hit by Western sanctions. The four new banks that have been given initial approval by the Central Bank of Myanmar are:

It should also be noted that in April last 2015, Japan's Tokyo-Mitsubishi UFJ became the first foreign bank to open their branch in Myanmar. 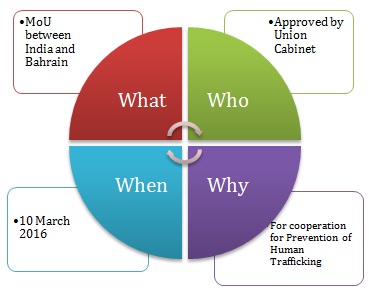 On 10 March 2016, the Union Cabinet gave its approval for a Memorandum of Understanding (MoU) between India and Bahrain. The MoU was based on cooperation for prevention of human trafficking, especially the trafficking among women and children, their rescue, recovery, repatriation and finally to ensure the re-integration of victims of trafficking.

1. On 13 March 2016, China’s Lin Dan earned his sixth All England badminton title. In the summit clash in Birmingham, Dan defeated compatriot Tian Houwei 21-9, 21-10. Dan has also been a five times world champion and double Olympic champion, secured his sixth championship 12 years after his first and four years after his last. He is popularly known as Super Dan. 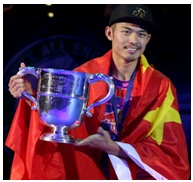 2. Serena Williams beated beat Russian-born Yulia Putintseva 7-6(2), 6-0 in the third round of the BNP Paribas Open in California. Williams punched below her weight in the first set, during which she made 29 unforced errors and had to break Putinsteva's service to force a tiebreak.

3. Viswanathan Anand, who is a five-time world champion, has now faced a shocking loss against Sergey Karjakin of Russia in the fourth round of Candidates Chess tournament on 15th March 2016. It turned out to be an irregular opening choice by Karjakin wherein Anand was closed to equalising but could not quite get there as Karjakin was all ready looking for the initiative. Contrary to his known defensive skills, Anand could not put up a stiff defense and his position came down very soon.