Click here to view the complete syllabus of Mathematics for MUOET/SMIT-2015.

Permutation and Combinations:
Recapitulation of nPr and nCr and proofs of

(1) In a graph with p vertices and q edges

(2) In any graph the number of vertices of odd degree is even.

Groups - (i) Binary operation, Algebraic structures. Definition of semigroup, group, Abelian group - examples from real and complex numbers, Finite and infinite groups, order of a group, composition tables, Modular systems, modular groups, group of matrices - problems.
(ii) Square roots, cube roots and fourth roots of unity from abelian groups w.r.t. multiplication (with proof).
(iii) Proofs of the following properties:
(i) Identity of a group is unique
(ii)The inverse of an element of a group is unique
(iii) (a-1)-1 = a, " a Є G where G is a group

(i) Divisibility - Definition and properties of divisibility; statement of division algorithm.
(ii) Greatest common divisor (GCD) of any two integers using Euclid’s algorithm to find the GCD of any two integers. To express the GCD of two integers a and b as ax + by for integers x and y. Problems.
(iii) Relatively prime numbers, prime numbers and composite numbers, the number of positive divisors of a number and sum of all positive division of a number - statements of the formulae without proofs. Problems.
(iv) Proofs of the following properties:
(1) the smallest divisor (>1) of an integer (>1) is a prime number
(2) there are infinitely many primes
(3) if c and a are relatively prime and c| ab then c|b
(4) if p is prime and p|ab then p|a or p|b
(5) if there exist integers x and y such that ax+by=1 then (a,b)=1
(6) if (a,b)=1, (a,c)=1 then (a,bc)=1
(7) if p is prime and a is any ineger then either (p,a)=1 or p|a
(8) the smallest positive divisor of a composite number a does not exceed √a

(i) Definition of vector as a directed line segment, magnitude and direction of a vector, equal vectors, unit vector, position vector of point, problems.
(ii) Two-and three-dimensional vectors as ordered pairs and ordered triplets respectively of real numbers, components of a vector, addition, subtraction, multiplication of a vector by a scalar, problems.
(iii) Position vector of the point dividing a given line segment in a given ratio.
(iv) Scalar (dot) product and vector (cross) product of two vectors.
(v) Section formula, Mid-point formula and centroid.
(vi) Direction cosines, direction ratios, proof of cos2 α + cos2β +cos2γ = 1 and problems.
(vii) Application of dot and cross products to the area of a parallelogram, area of a triangle, orthogonal vectors and projection of one vector on another vector, problems.
(viii) Scalar triple product, vector triple product, volume of a parallelepiped; conditions for the coplanarity of 3 vectors and coplanarity of 4 points.
(ix) Proofs of the following results by the vector method:
(a) diagonals of parallelogram bisect each other
(b) angle in a semicircle is a right angle
(c) medians of a triangle are concurrent; problems
(d) sine, cosine and projection rules
(e) proofs of 1. sin(A±B) = sinAcosB±cosAsinB
2. cos(A±B) = cosAcosB μ sinAsinB

Straight line:
(i)Straight line: Slope m = (tanθ) of a line, where  θ is the angle made by the line with the positive x-axis, slope of the line joining any two points, general equation of a line - derivation and problems.

(ii) Conditions for two lines to be (i) parallel, (ii) perpendicular. Problems.
(iii) Different forms of the equation of a straight line: (a) slope - point form (b) slope intercept form (c) two points form(d) intercept form and (e) normal form - derivation; Problems.
(iv) Angle between two lines point of intersection of two lines condition for concurrency of three lines. Length of the perpendicular from the origin and from any point to a line. Equations of the internal and external bisectors of the angle between two lines- Derivations and Problems.

Definition of a conic.

Derivations of the following:
(1) Condition for the line y= mx + c to be a tangent to the ellipsex2/a2 + y2/b2 = 1 at (x1,y1) and finding the point of contact
(2) Sum of the focal distances of any point on the ellipse is equal to the major axis
(3) The locus of the point of intersection of perpendicular tangents to an ellipse is a circle (director circle)

(2) Difference of the focal distances of any point on a hyperbola is equal to its transverse axis.

(3) The locus of the point of intersection of perpendicular tangents to a hyperbola is a circle (director circle).

Relations between sides and angles of a triangle

Sine rule, Cosine rule, Tangent rule, Half-angle formulae, Area of a triangle, projection rule (with proofs). Problems. Solution of triangles given (i) three sides, (ii) two sides and the included angle, (iii) two angles and a side, (iv) two sides and the angle opposite to one of these sides. Problems.

(i) Geometrical meaning of dy/dx, equations of tangent and normal, angle between two curves. Problems.
(ii) Subtangent and subnormal. Problems.
(iii) Derivative as the rate measurer. Problems.
(iv) Maxima and minima of a function of a single variable - second derivative test. Problems. 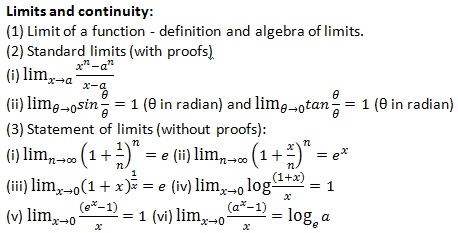 (i) Statement of the fundamental theorem of integral calculus (without proof). Integration as the reverse process of differentiation. Standard formulae.