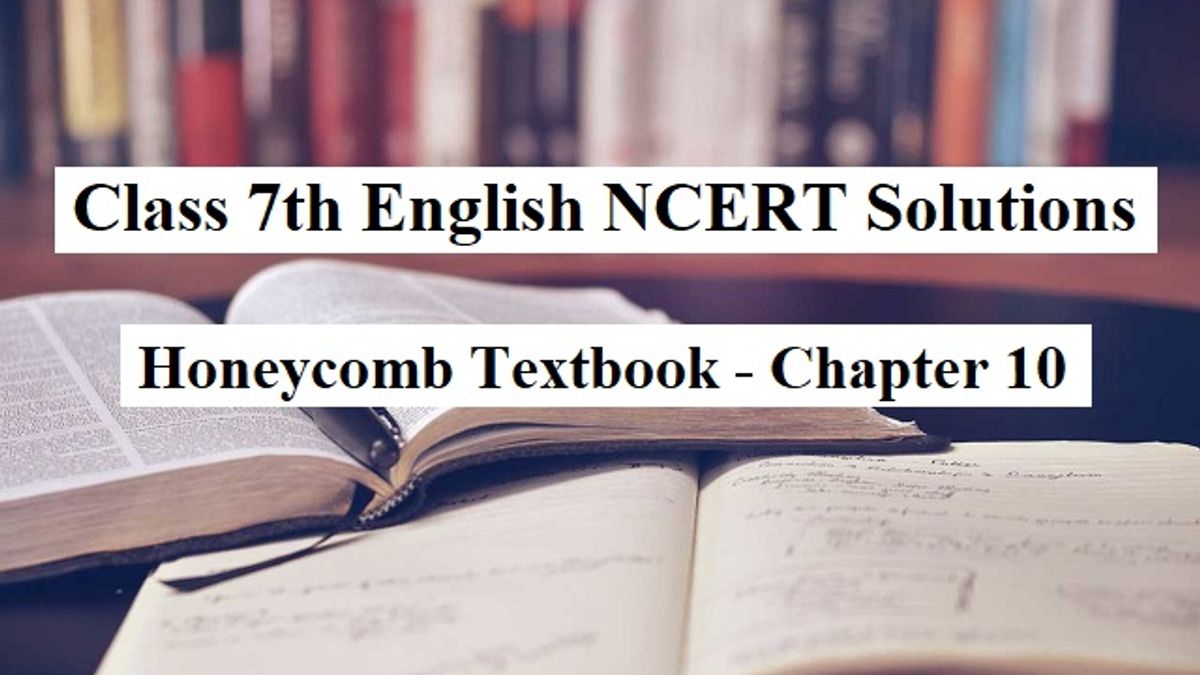 Check Class 7 NCERT Solutions for English Subject. In this article, we have provided NCERT Solutions for Chapter 10 from the English Honeycomb Textbook. Chapter 10 is about how cricket is the most appealing national entertainment today. How much do we really know about the game called ‘cricket’? The NCERT solutions of this chapter have been provided after a detailed analysis of the latest syllabus issued by CBSE. Students of Class 7th can study the answers provided here to score well in their school exams.

Ques: “There is a historical reason behind both these oddities.” In the preceding two paragraphs, find two words/phrases that mean the same as ‘oddities’.

Ques: How is a cricket bat different from a hockey stick?

Answer: A cricket bat is thick and flat while a hockey stick is bent at the bottom.

Ques: Write True or False against each of the following sentences.

Ques: “ the men for whom the world is a stage”.

It refers to the famous cricket fields in the world.

It means that there are many cricket playing countries in the world.

It implies that cricketers are like actors and every cricket ground is like a stage on which the drama of cricket is enacted the world over.

Answer: . It implies that cricketers are like actors and every cricket ground is like a stage on which the drama of cricket has enacted the world over.

Ques: Name some stick-and-ball games that you have witnessed or heard of.

Ques: The Parsis were the first Indian community to take to cricket. Why?

Answer: Parsis were in the close contact with the British because of their interest in trade. They were the first Indian community to westernise and went up taking up the game of cricket.

Ques: The rivalry between the Parsis and the Bombay Gymkhana had a happy ending for the former. What does ‘a happy ending’ refer to?

Answer: Happy ending’ refers to the defeat of the Bombay Gymkhana by the Parsi club in a cricket match held in 1889.

Ques: Do you think cricket owes its present popularity to television? Justify your answer.

Answer: Yes, cricket owes its popularity to television. It has expanded the audience of the game by taking cricket to villages and small towns.

Children from these places now had the chance to learn the game seeing the international games and imitating their favourite cricketers.

Ques: Why has cricket a large viewership in India, not in China or Russia?

Answer: Cricket is not played in communist countries like China and Russia so it has less viewership there. India is one of the oldest cricket playing nation which further adds to its large viewership in the country.

Ques: What do you understand by the game’s (cricket) ‘equipment’?

Answer: The accessories like bat, ball, stumps and bells are the equipment used in playing the game. Pads, helmets and gloves are protective equipment used while playing cricket.

Ques: How is Test cricket a unique game in many ways?

Answer: Test cricket is unique because it can go on for five days and still can end with a draw. No other game requires even half of this time to finish. A football match is played for 90 minutes.

Even nine innings of a baseball match gets over less than what it takes to finish a one-day match.

Ques: How is cricket different from other team games?

Answer: Cricket is different from other team games because in cricket, the length of the pitch is mentioned as 22 yards however, the shape of the ground could be oval or circular. There is no specific measurement for the size of the ground as well.

It is the only game played for five days and can end without a specific result. Unlike cricket, many other popular games like hockey or football follow certain specification for grounds

Ques: How have advances in technology affected the game of cricket?

Answer: Advancement in technology has been used in manufacturing protective equipment in cricket. The newly invented vulcanised rubber was used in pads and gloves. The helmets are made up of metal and lightweight synthetic materials.