Cartosat 3 launch: All you need to know about India's earth observation satellite

Cartosat-3 launch: Cartosat 3 is a high-resolution earth observation satellite,  which will be useful for weather mapping and army defence.

Cartosat 3 launch: ISRO launched Cartosat-3 satellite along with 13 commercial nanosatellites from the US at 9:28 am IST on November 27, 2019. Cartosat-3 was launched aboard the PSLV-C47 launch vehicle.

The satellites were launched into Sun Synchronous orbit from a launch pad at the Satish Dhawan Space Centre in Sriharikota, Andhra Pradesh. ISRO had announced the beginning of the 26-hour countdown for the launch of the PSLV-C47 mission on November 26 at 7:28 am.

This is the 21st flight of India’s Polar Satellite Launch Vehicle in 'XL' configuration and 74th launch vehicle mission overall from the Satish Dhawan Space Centre. The PSLV-C47 has 6 solid strap-on motors. The Cartosat 3 satellite will be placed at an orbit of 509 km and inclination of 97.5 degrees. 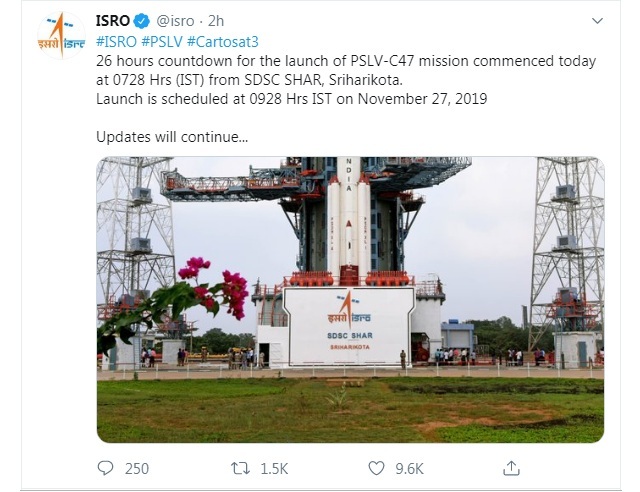 Cartosat 3 satellite: Everything you need to know

Cartosat-3 satellite is a third-generation satellite with agile and advanced features including high-resolution imaging capability.

2. It is an advanced satellite, built and developed by ISRO, to replace the IRS series.

3. The satellite has a panchromatic resolution of 0.25m, making it the highest resolution imaging satellite.

4. The satellite uses 1.2 m optics with 60 percent of weight removal in comparison to Cartosat-2.

5. The other features of the satellite include use of adaptive optics, acousto optical devices and in-orbit focusing using MEMs.

6. The satellite also has large area-light weight mirrors and advanced sense with a high-quality resolution.

The advanced earth observation and imaging satellite will be used for weather mapping, cartography or army defence and other strategic applications.