Chandrayaan 2 landing: Why ISRO feels last 15 minutes will be 'terrifying'

Chandrayaan 2 landing: ISRO has described Vikram Lander’s last 15 minutes of descent as "terrifying", as ISRO has never attempted soft landing on the moon before. 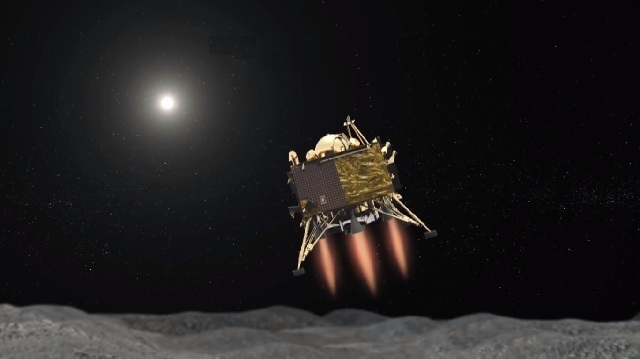 Chandrayaan 2 landing: Vikram Lander is scheduled to make a historic touchdown on the Moon's surface in the early hours of September 7, 2019. ISRO has described the last 15 minutes of Vikram Lander's descent as "terrifying", as it will be the first time that ISRO attempts a soft landing on the lunar surface. A successful landing will make India the first nation to land a mission successfully near the Moon's South Pole.

Vikram Lander's successful landing will also make India the fourth nation in the world to achieve a soft landing on Moon, after nations such as the United States, Russia and China.

ISRO had successfully carried out Lunar Orbit Insertion (LOI) manoeuvre during the Chandrayaan-1 mission. However, ISRO has never done attempted soft landing on the moon before.

Chandrayaan-2 will begin its soft landing manoeuvre when it is about 30 km away. From there, the Vikram lander will take just 15 minutes to land on the moon’s surface. This 15-minute period has been described as "terrifying" by ISRO, as it will be the first time that ISRO attempts to go so close to another body, which has no atmosphere.

Chandrayaan 2 will be using its propulsion system to break the velocity and land softly on the Moon.

ISRO will attempt a soft landing on the Moon for the first-ever time and it will do so by creating a balance between the gravity and thrust. The crucial landing part will be carried out by Chandrayaan-2’s moon lander, Vikram, using its onboard equipment in a coordinated manner.

The Vikram lander, which will comprise the Pragyan rover, will begin its powered-descent between 1 am and 2 am on September 7.  The lander is expected to make the historic touchdown on the Moon between 1.30-2.30 am.

ISRO explained in a video that the Vikram lander is fitted with three cameras-Lander Position Detection Camera (LPDC), Lander Horizontal Velocity Camera (LHVC) and Lander Hazardous Detection and Avoidance Camera (LHDAC) to help with a soft landing on the Moon’s surface.

The four engines located on the four sides of the Vikram lander will be switched on during the rough braking phase at an altitude of 100 km. The Lander Position Detection Camera, KA Band-1 and Laser Altimeter will be activated at this point to ensure that the lander is positioned in the space just above the landing site to enable it to land smoothly.

Upon descent, the Lander Position Detection Camera will be switched on to identify the landing site. During the hovering stage of the Vikram lander, 400m away from the lunar surface, the two engines will be started and LASA, Ka-band 2 and LHVC will also be activated to coordinate for the perfect landing.

When Vikram lander is at 10m away from the moon's surface, ISRO will initiate the landers soft landing by igniting the central engine and using the touchdown sensor at the bottom of the stand.

After the moon landing, Vikram Lander will deploy three payloads- Chaste, Rambha and Ilsa. Rover Pragyaan will be rolled out between 5.30-6.30am.