The first de-orbit manoeuvre was performed using the onboard propulsion system in mere 4 seconds. The first de-orbit mission has brought the Vikram Lander at an orbit of 104 km x 128 km around the Moon. The Chandrayaan-2 Orbiter will continue to orbit the Moon in its existing orbit.

The Vikram Lander will now perform its second and final de-orbit manoeuvre on September 4, 2019, which will bring it further closer to the Moon and begin its preparations for the historic moon landing. Chandrayaan-2 is just a week away from its much-awaited landing on the darker side of the moon. The Lander will begin its powered descent on the lunar surface on September 7 and it is expected to make its touch down on the south pole of the Moon between 1:30 - 02:30 am IST.

The operations of Vikram Lander and Chandrayaan-2 Orbiter are being monitored from the Mission Operations Complex (MOX) at ISRO headquarters in Bengaluru. Currently, all systems of the orbiter and Lander have been reported to be healthy. 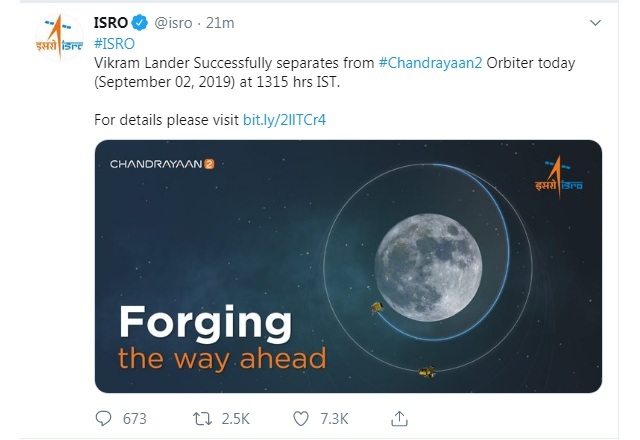 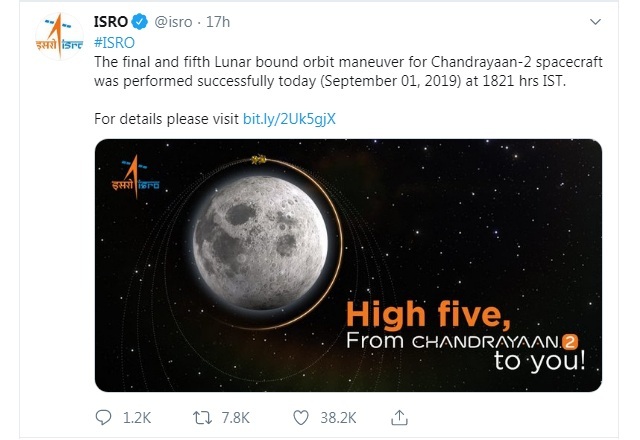 Following is the tentative plan of Chandrayaan-2’s upcoming operations after today’s maneuver:

The Vikram Lander is carrying 'Pragyan' rover and three scientific payloads to conduct surface and subsurface science experiments. Pragyan is a six-wheeled rover, which will conduct several scientific experiments on the Moon's surface.

The Lander is just a week away from making a soft landing on the south pole of the Moon. It has been designed to function for one lunar day, which is roughly around 29.5 Earth days. A lunar day is measured by the time Moon takes to orbit around the Earth.

A successful moon landing will place India in an elite club of nations that have achieved the unique feat before. Only the US, Russia and China have managed to land successfully on the Moon.