Chandrayaan-2 is all set to land on the surface of the Moon in less than 24 hours. 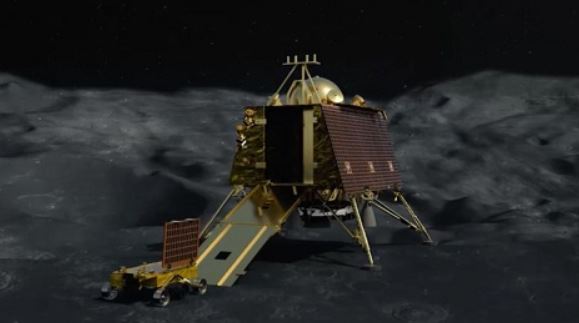 The Chandrayaan-2, India's ambitious lunar mission, will touchdown the lunar surface tonight. Lander Vikram is scheduled to make a soft-landing on the surface of the Moon. According to the information released by ISRO, the rover Pragyan will roll out from the moon lander between 5:30 am and 6:30 am.

Chandrayaan-2 has travelled around 3,84,000 km and now the Vikram lander is just 35 km above the Moon's surface. Chandrayaan-2 will enhance the understanding of Moon for explorers, scientists and common people. Scientists believe that many new figures can be found through this lunar mission.

It has a weight of 2,379 kg and capable to generate 1,000 watts of power. The orbiter will be a medium of communication between Vikram Lander and the Indian Deep Space Network (IDSN). The orbiter will work for one year from a distance of 100x100 kilometre.

It has a weight of 1,471 kg and it can generate 650 watts of power. It is named after the Father of the Indian Space Programme, Vikram Sarabhai. Vikram will work for one lunar day which is equal to 14 days on earth. The lander can communicate with IDSN at Byalalu, Orbiter and Rover. Vikram lander will provide a soft landing on the surface of the Moon.

It is a 27 kg device with 50-watt power generation capacity. Pragyan is a six-wheeled rover which will explore the surface of the Moon. Rover named Pragyan, which translates to 'wisdom' in Sanskrit. It can communicate with Vikram lander only and able to travel up to 500 meters.