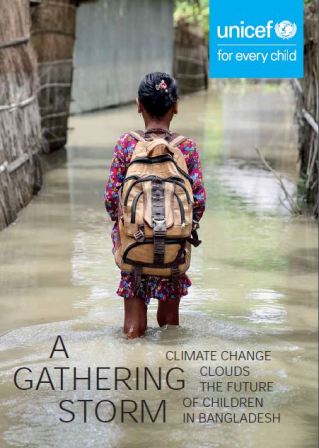 UNICEF has recently released a report on situation of Children of Bangladesh that they are facing due to climate change. The report titled, “A Gathering Storm: Climate Change Clouds the Future of Children in Bangladesh" informs that in total, an estimated 19.4 million children, spread across 20 of Bangladesh’s 64 districts, are exposed to the most detrimental and hazardous consequences of  short- or longer-term climate change.

UNICEF Report shows that Bangladesh’s 64 Districts are exposed to the greatest risk from climate change-related disasters, such as cyclone, fl ood, fl ash fl ood, drought etc. As seen in the map, the coastline facing the Bay of Bengal and several more remote inland areas are particularly vulnerable.

The requirement, mandatory under IMO’s Convention on Facilitation of International Maritime Traffic (FAL Convention), is part of amendments under the revised Annex to the FAL Convention, adopted in 2016. It was important measure because 10 billion tonnes of goods which are traded by sea annually across the globe.