The Indian Navy's state of the art Nuclear, Biological and Chemical Training Facility has been inaugurated by Chief of Naval Staff Admiral Sunil Lanba at INS Shivaji, Lonavala. The new facility will train personnel of naval ships fitted with nuclear, biological and chemical detection and protection systems.

The Indian Navy's state of the art Nuclear, Biological and Chemical Training Facility (NBCTF) was inaugurated on March 25, 2019 by Chief of Naval Staff Admiral Sunil Lanba at INS Shivaji, Lonavala.

The training facility has been named ABHEDYA, which means impenetrable in Sanskrit. The Goa Shipyard Limited had signed the contract with the Indian Navy for the construction of the facility in March 2016. It was handed over to the Indian Navy on September 28, 2019, well ahead of schedule.

The timely completion of this project reflects the superior technical design and execution abilities of the Indian Navy and Goa Shipyard Limited. 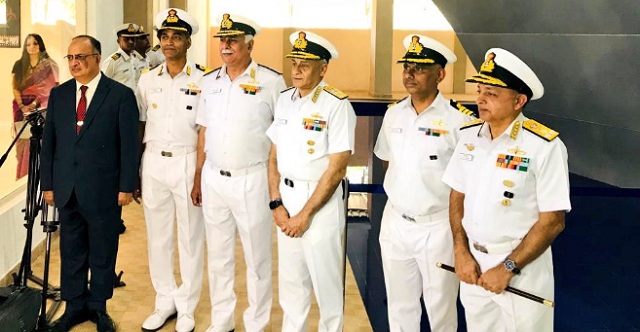 • The steel structure of the simulator represents the relevant NBC compartment of the ship such as upper decks, citadels, cleansing stations and DCHQ.

• The upper deck compartment is equipped with live agents along with NBC equipment such as SIRS, SICADS and other NBC detection and monitoring equipment.

• The trainees will have to detect, monitor, survey and decontaminate the areas using actual NBC equipment, providing real-time NBC scenarios.

The annual joint exercise between India and Sri Lanka, 'Mitra Shakti-VI', began at Diyatalawa in Sri Lanka on March 26, 2019. The exercise will conclude on April 8, 2019.

The exercise is conducted every year as a part of military diplomacy and interaction between the armies of the two nations. It is held in India and Sri Lanka alternatively.  India has sent a 120 member strong contingent of army personnel including 11 officers to participate in the two-week long exercise.

• The exercise will help in building proficiency in tackling transnational terrorism, the conduct of joint tactical operations and building combat skills.

• It will also provide an ideal platform for sharing each other's experiences and learning from best practices being followed by both the armies.

• It will involve tactical level operations in an international counter insurgency and counter-terrorist environment under the United Nations mandate.

• This year, the scope of the exercise has been significantly increased, as, in addition to infantry-based events, the participation of personnel from artillery, engineers, signals, army medical corps and special forces will also take place.

• It would also involve sports fixtures and cultural events providing an opportunity for both armies to learn from each other, re-enforce shared values and to build individual bonds of friendship and camaraderie.

Mitra Shakti is one of the largest bilateral armies to army exercises conducted in the region. Based on the success of previous exercises, it has been recently upgraded from a platoon level engagement to a full company level engagement.