Greece has elected Katerini Sakellaropoulou as the first woman president in the country's history. 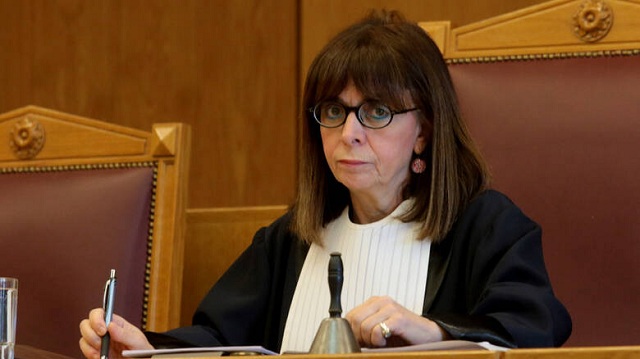 Greece’s parliament elected Katerina Sakellaropoulou as the first woman president on January 22, 2020. The 63-year-old was elected to the top post in a historic vote, which saw 261 of the total 294 MPs vote in favour of her.

The final result of the vote was declared by Greece’s Parliament Chief Costas Tassoulas. Katerina is a senior judge with expertise in environmental and constitutional law. She is scheduled to take the oath of office on March 13, 2020.

Katerina will succeed Prokopis Pavlopoulos, whose 5-year term is scheduled to end in March. Until now, she was serving the head of Greece’s top administrative court, the Council of State.

Who is Katerina Sakellaropoulou?

• Katerina Sakellaropoulou, a senior High Court judge is the daughter of a Supreme Court judge. She was the first woman to head Greece’s top administrative court -the Council of State.

• Katerina Sakellaropoulou was able to secure one of the highest vote margins in the history of Greece’s parliament by drawing support from across party lines. She was backed by both main opposition leftist and socialist parties.

• She received a total of 261 votes, which is way above the required 200 votes in the 294 member Parliament. She has been elected for a five-year term.

• Katerina was nominated for the post by Prime Minister Kyriakos Mitsotakis, who called her an outstanding judge whose candidacy unites all Greeks.

• Mitsotakis was earlier criticized for appointing very few women in his cabinet.

Greece is historically known to have a low representation of women in its high-level politics with only one among the 18 senior positions being held by women before January 22, 2020. Katerina Sakellaropoulou’s election is expected to unite the country's polarised political systems, as she does not belong to anyone political party.