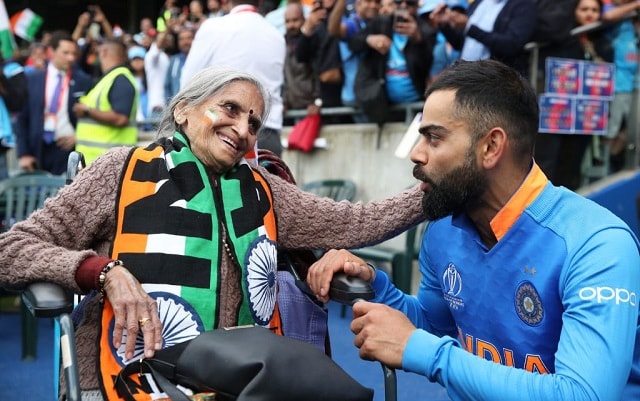 Charulata Patel| India vs Bangladesh, World Cup 2019: India became the second semi-finalist on Tuesday, after the men-in-blue beat Bangladesh by 28 runs in India vs Bangladesh World Cup cricket match at Edgbaston in Birmingham. While India celebrated its victory, 87-year-old Charulata Patel caught the camera eye and became a twitter star overnight. An excited Charulata Patel attracted all the cameras as she enthusiastically blew her trumpet, cheering for Virat Kohli -led Indian cricket team from the stands, celebrating all boundaries and wickets.

Virat Kohli even posted a picture, sharing the moment on twitter and on his instagram page with the caption, "would like to thank all our fans for all the love & support & especially Charulata Patel ji. She's 87 and probably one of the most passionate & dedicated fans I've ever seen. Age is just a number, passion takes you leaps & bounds. With her blessings, on to the next one."

When asked about her cricket passion, Charulata Patel said, "I have been watching cricket for last many decades, from the time I was in Africa. Earlier I used to watch on TV when I was working, but now that I am retired I watch it live. " Charulata Patel was also present on the stands when India won its first world cup in 1983.

The Mahindra Group Chairma, Anand Mahindra, in a tweet claimed that 87-year-old Charulata Patel is Indian cricket team's lucky charm and that she should be given free ticket to the semi-finals and finals of World Cup 2019.

Anand Mahindra later tweeted saying he would like to reimburse her ticket costs for the rest of the India matches.