He developed the missile for the Indian Army and local police in fighting terrorism. The missile was developed for launch through a robot. 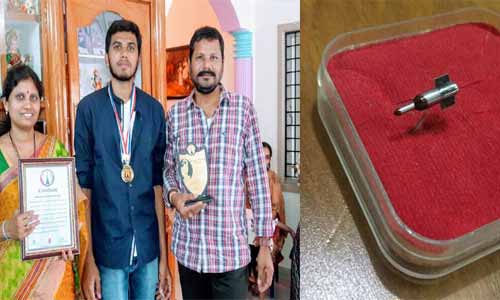 Dacharla Panduranga Rohith, a student of Chennai's SRM University, was on 21 August 2017 recognised by World Records of India for developing a nano missile.

• The basic prototype of the missile was tested in the presence of Assistant Commissioner of Police Ramapuram in Chennai and the video was submitted to World Records of India for recognition in July 2017.
• He developed the missile for the Indian Army and local police in fighting terrorism. The missile was developed for launch through a robot.
• This 1 cm nano missile can fly by burning the red phosphorus, and hit the target of three metres distance.
• Rohith is now working on the changing the fuel to give more thrust and reduce the weight of the missile so that it can be targeted at longer distances.
• Once the project is completed, he will hand over the missile to the DRDO for tests and inclusion in the weaponry of the armed forces.

Rohith completed his high school and Intermediate education from Sriviswasanthi Educational Institutions in Vuyyuru of Krishna district and is studying final year Computer Science Engineering at SRM University in Chennai.

His interest in flight technologies and missiles led him to serve as a flying cadet in the aero show organised by the Indian Air Force in Vijayawada a few years ago.